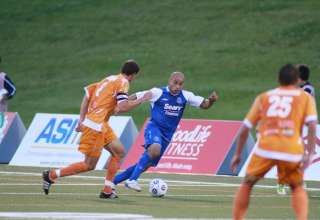 After FC Edmonton defender Paul Hamilton cleared the ball out of the penalty area, it pinged around in a sea of blue and orange shirts. Pitchkolan simply turned on the ball and hammered it into the top left corner of the goal from 20 yards out.

“It’s pretty disheartening,” said Hamilton. “I think we played a lot better as a team today. We are on a streak right now where nothing is going our way.”

And that included a point-blank header from Hamilton that Islanders keeper Ray Burse was able to tip over the bar. Chris Lemire floated in a corner kick right at the death of the first half, and Hamilton strolled in at the back post, unmarked. The ball rocketed off his head, but Burse held his ground and palmed the ball over the bar.

“I thought I had the goal,” said Hamilton “I thought he was coming across goal (Burse held his ground). Let’s say I would like to have that one back.”

The Islanders, because of CONCACAF Champions League and NASL commitments, hopped from Central America to Montreal to Puerto Rico and to Edmonton in the space of less than two weeks. Off the bat, the Islanders came at FCE, pressing the defenders and bringing the entire midfield and two fullbacks into an eight-man attack.

It was clear that the Islanders, wearied by the hectic schedule, wanted to take the early initiative.

“We started off a bit sloppy,” said FCE assistant coach Dave Randall. “We were a bit behind in pace.”

But, despite having the run of play for most of the half, the Islanders didn’t do much to trouble FCE keeper Rein Baart, save for a partially scuffed shot from striker Jonathan Fana. Logan Emory sent an open header over the bar, and David Foley sent a volley attempt over the goal, as well.

While FCE worked its way into the game later in the half, Puerto Rico would have felt unlucky not to have got that early goal that the Islanders were seeking.

Burse was called upon again to deny Edmonton. In the second half, Islander Matt Bouraee was stripped of the ball by Hamilton, who was pressing into the offensive end on a set piece. Hamilton took the ball and left it for teammate Ilja Van Leerdam, whose shot from 25 yards forced Burse into a diving save.

Puerto Rico brought off Fana in the second half, and looked to have taken the foot off the gas pedal, satisfied with the 0-0 draw. The game turned scrappy as the rain fell, and a late challenge from FCE midfielder, who came on as a late sub, started a bit of a shoving match.

Saiko — FCE’s co-leading scorer with six goals — was a surprise omission from the starting lineup.

Eddy Sidra got his first start of the season at left back and had an impressive game, playing the full 90 and doing well to join the attack and provide a bit of an edge on the defensive side.