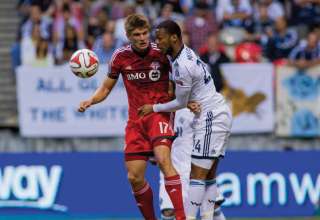 On paper, Toronto FC’s 2014 season was a marked improvement over a history of desultory results. TFC won as many games — 11 — in 2014 as it did in the previous two seasons combined, setting new club records for both wins and points in a season. At full strength, the Reds looked like they were capable of competing with any team in MLS.

The season, however, wasn’t sold to fans as a year of “marked improvement.” No, it was sold as a “Bloody Big Deal” — worldclass Designated Players and a firm promise from Maple Leaf Sports and Entertainment President/CEO Tim Leiweke that the Reds would finally reach the playoffs for the first time in club history. Instead, as the season wore on, and the fresh coat of paintpeeled away to reveal the same foundational problems — lack of depth, late-game defensive breakdowns and front-office dysfunction — that have plagued this team from its inception. Even for a team well-practised in letting down its fanbase, this was the biggest disappointment yet.

So with Leiweke stepping down at MLSE and roughly 8,000 new seats to fill in the renovated BMO Field, the question facing the Reds heading into 2015 is whether this team is truly close to contending, or if major personnel changes still need to be made.

To a man, every TFC player and executive who spoke at the season-ending media interview sessions is hoping for roster continuity.

“We’ve seen [a roster blowup] every year, and every year we’re pretty much in the same predicament,” said Dwayne De Rosario. “I don’t think it would be ideal to keep following in the same footsteps as we’ve done in the past since it hasn’t really reaped any benefits….Rome isn’t built in a day or overnight and we saw it this year. No matter how many good players you bring in, it still takes time.”

Later, De Rosario’s contract option was not picked up by TFC, and he was left unprotected for the MLS Waiver Draft process.

As De Rosario and others pointed out, top teams in both MLS and around the world generally succeed due to a core group of players who have stayed together over several years. Given the Reds’ constant tumult both on and off the field, there has never been that so-called “voice of the club” to impart any sort of culture.

“We lack a little bit of ownership of people that own the Toronto FC club,” rookie Nick Hagglund said. “New people come in, or rookies come in, or new coaches, and there’s not someone who owns the team as a whole… As a group, we need to own this club and that starts with consistency and keeping the same people around.”

It would indeed be hasty to undo last season’s gains in the name of wholesale change. But, given the major positions that Toronto will need to address, the 2015 squad will still look quite different than the 2014 side. If you replaced a car’s engine and wheels, you could say that car is a lot closer to being “rebuilt” than “tweaked.”

“We’re not overhauling the roster again,” General Manager Tim Bezbatchenko firmly stated, though he also said the club will look to add back-line depth (a centre-back partner for Steven Caldwell) and a midfield playmaker to team with Michael Bradley. There have also been rumours that striker Gilberto is being targeted by expansion side Orlando City SC, though the Brazilian forward says he wants to keep playing for TFC.

Even if Gilberto stays, at least one more striker will be required for either depth purposes or as a replacement for Jermain Defoe. Despite the many rumours aboutDefoe’s status, Bezbatchenko continues to deny that the forward is on his way out.

“There’s no offers [for Defoe], there’s no planned move,” the GM said. “We’ll sit down with Jermain and figure out what he wants to do. We’ve always said we don’t want players who don’t want to be here, but

we haven’t heard that from Jermain yet.”

This public stance notwithstanding, it would be surprising to see Defoe back in Toronto next season given all of the speculation about his displeasure with the team and his desire to return to England. Any club that loses its leading scorer requires more than a minor roster adjustment, though Defoe’s departure will give TFC some salary cap space and a DP slot to work with.

Bezbatchenko used an interesting and, possibly unintentionally revealing, hypothetical when describing MLSE’s commitment to Toronto FC, saying that “if, for example, we were to sell someone, we’ve gotten a commitment that it’ll be reinvested into the players or whatever we decide to do that’ll improve this club.” One would suspect the GM would only approach ownership in such a scenario if one of TFC’s highest-paid players was involved, namely the three Designated Players. If Bradley and Gilberto are staying, then we may already have our hint about how the Reds will approach the post-Defoe era.

What Will a New CBA Bring?

Of course, guessing about the salary cap could be a moot point since the current Collective Bargaining Agreement between the MLS players’ union and the league expires in the middle of January. The new CBA could, and likely will, adjust virtually all aspects of MLS business, from cap space to the DP rules to even the very basics of roster construction.

For instance, Toronto, Vancouver and Montreal could be required to have more than the current roster minimum of three Canadian domestic players. That’s not a problem for TFC at the moment, as it has eight Canadians on the roster. What could be of larger import is if the new CBA no longer counts Canadians as “international players” for the American clubs, which would create more opportunities for this country’s talent in MLS as a whole and diminish the edge the Reds, Whitecaps and Impact have in creating spots for Canadians.

In July, MLS Commissioner Don Garber hinted that the roster rules will be changing.

“We are working on a new approach to our international-player rules as they relate to Canada. Stay tuned.”

But, before MLS Cup, Garber’s tone had changed — he went back to the argument that U.S. labour laws would not allow for American teams to give Canadian preferential roster treatment over other foreigners.

In theory, TFC is well-positioned to roll with whatever the new CBA will throw at it, given Bezbatchenko’s background in the league office and his alleged back-of-his-hand knowledge of salary cap and transfer rules. With former coach Ryan Nelsen out of the picture and Leiweke soon leaving MLSE, the Reds are now firmly Bezbatchenko’s team, with his chosen coach in Greg Vanney.

The GM implored fans to look to the positives rather than dwell on the big, glaring non-postseason elephant in the room.

“Could we have made the playoffs? Absolutely,” Bezbatchenko said. “Should we have? With the talent we have on the team, we certainly put ourselves in the position to make the playoffs and that’s the first time in a while where our fans have had something to care about down the stretch.

“It goes back to relevancy. We’ve proven this year and we’re now relevant again in MLS discussion. We’re trending positively and we have a lot to build on, and we certainly could’ve made the playoffs if we’d done a couple of things differently but that’s sports… If [making the playoffs] is the only barometer of success, then we failed your test, but I have to look at things in the long term. It’s not just one year and I think we’re set up for good things next year.”

Needless to say, the Toronto fanbase doesn’t give a hoot about “relevancy” by this point, but results. While Bezbatchenko has only been on the job for 15 months, he (rightly or wrongly) has eight seasons’ worth of baggage on his shoulders, and all the progress in the world doesn’t erase the fact that TFC fans sat through yet another coaching change and yet another also-ran finish. If the Reds can’t finally break their postseason jinx in 2015, Leiweke’s replacement as the new MLSE president may well fire Bezbatchenko and Vanney and force the club to reboot itself yet again.

With Leiweke’s hype evaporated, it could be that TFC is able to somewhat fly under the radar, focus on soccer and, for once, actually exceed expectations. You’ll excuse TFC supporters for not believing it until they see it.