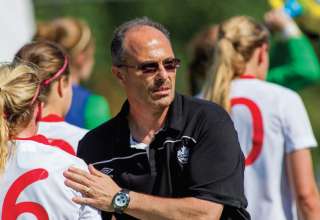 Valerio Gazzola has been on and off the radar since he parted ways with the Montreal Impact in 2001. But he’s always been around. Doing what coaches do. Coaching. And when not coaching, teaching those who do. He’s been doing it for years at the Canadian Soccer Association, instructing C- and B-licence courses. He’s one of the few instructors to teach the A-licence course on a regular basis.

He’s been involved with the Quebec Soccer Federation (FSQ) and, even at the regional and club level, in Laval, north of Montreal, where he coached for the first time in 1982 (at age 18) and still lives.

When somebody calls to offer him an opportunity to coach, wherever it is, chances are he’ll take it. Or at least, he will consider it. That’s how he ended up being an assistant to head coach Andrew Olivieri with the women’s national team at the U-20 Women’s World Cup, although he never envisioned himself coaching women’s soccer.

“John had just won the bronze medal at the 2012 Olympics, and the following November he came to Quebec for a coaching seminar. He was a guest speaker, and so was I. Later on, he called me and said he wanted me to help out,” says Gazzola. “I told him, are you sure you want me? I know nothing about women’s soccer, it would be something entirely new for me, a whole new culture…”

But Herdman insisted, as he has done with many other of his recruits, and Gazzola was off to Cyprus.

And then, Olivieri called him up.

“I told him, I can’t, I’m overloaded,” recalls Gazzola. “At the time, I had just gone to Italy and was back to prepare a conference here with the Italians, I was writing the new C licence for the CSA, still giving a hand to the FSQ…

“I ended up doing it, but as a friend more than anything, because I’ve known Andrew for a long time.”

Gazzola, who was head coach of the Canadian U-20 men’s national team in 2010-2011, said yes because he knew he’d have one of the greatest experiences of his professional life. And he did.

“When do you ever get a chance to coach a national team, at a World Cup, in your own country, in your home town? Chances are it will never happen. But I was able to do it, to coach a game at (Montreal’s) Olympic Stadium, when we played against North Korea.”

“If the Impact calls me tomorrow morning, I would go there running,” he admits readily. “Despite the results they’ve had in their first three years in MLS, I think they’re on the right track. With the academy in place, their new training facility coming soon, the building blocks are in place. I think what they’ve accomplished so far is fantastic.”

The Impact will add a new USL-PRO team, FC Montreal, for the 2015 season, and owner Joey Saputo is part of a consortium that has purchased Bologna of Italy’s Serie B. Saputo has said he would like to place some of the Impact’s young players in the Bologna youth system.

Many people have made a fuss, including Impact management, about the importance of having MLS experience to be able to coach in the league. But that’s overrated, says Gazzola. He is confident he would do well even if he’s never coached in that league before.

“The style and the culture of North American soccer has not changed in 20 years,” says Gazzola, pointing out that in his first three years at the helm of the Impact in the APSL, that league was the top level in Canada and the United States until MLS came along in 1996. “The same ingredients have always been there (regardless of the league), although the tactics and the systems of play have changed.

“It’s a fast-paced type of soccer, it’s high-intensity, a lot more direct, like it was at the time. So I would be more worried about bringing in a European coach into this environment than a coach who’s never worked in MLS.”

He is Ready for Saputo’s Call

Gazzola already knows what he’d do if Saputo called him up and gave him the job. Although he has no regrets about the way he coached the Impact in his first two stints, he would approach one aspect in a different way.

“One thing I would do a lot better is… Nowadays, you need to engage the players in the process. Because ultimately, they do play on the field. And they have to feel comfortable with what they’re doing,” says Gazzola.

“If they don’t believe in what you’re trying to build, you have no chance.

“If the players are engaged, then you can also hold them accountable,” he adds.

And if Toronto FC calls instead of the Impact, Gazzola’s answer would be the same.

“I leave tomorrow morning. TFC, Montreal or any MLS team,” he says. “And if they asked me to be assistant coach on a men’s U-17 team, my answer would be yes, because I’m not doing anything in particular for now. And if there was an opportunity to coach a third-division team in Italy or France, for instance, I would probably do it. Because to be able to coach at a high level, you have to expose yourself to everything.

“That’s what [former Italian national team manager, who was recently axed by Galatsaray] Cesare Prandelli told me when we had a long conversation during my trip in Italy, and we were sharing our experiences with our respective U-20 national teams,” says the 50-year-old veteran coach, who has also coached Canadian national teams at the U-17 and U-18 level, as well as at the Francophone Games. “Prandelli said that to be an almost perfect manager, you have to experience all types of situations so that you can relate to your players and manage them better.”

Because that’s what coaches do. The best ones, at least.