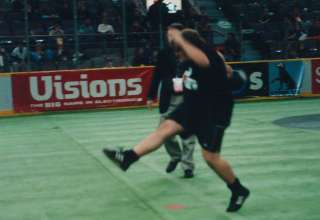 Steven Sandor in "ahem" action at the Drillers charity game, 1999.

Writing this month’s feature on Giuliano Oliviero and Ian Bennett, both with the Milwaukee Wave, really took me down memory lane.

I know a lot of the young movers and shakers in soccer pooh-pooh the indoor game with boards; they tell the kids to go with futsal, instead. But, I always loved playing the games with the boards — maybe because, being such an, ahem, “big body” helped me win a lot of battles along the wall in my men’s league games.

And, the Edmonton Drillers — the team that played in the National Professional Soccer League in the late 1990s — will always hold a special place in my heart.

I got to pick the three stars after the Drillers games. And, on one special night, I got to go on the field as part of a charity game held as part of a Drillers home date, at what’s now known as Rexall Place.

Oiler Georges Laraque was also on the field. At the time, he was regarded as the top fighter in the NHL. I remember that, after one scrap, he told me that we felt for the other guy because there was so much blood. But he also loved the game of soccer. He’d often joke that he wanted to play for the Drillers, that he wanted to be a two-sport athlete. And the Oilers gave him and defenceman Bert Robertsson permission to play in the charity game.

I knew the guys well — I was also the editor of the Oilers game magazine at the time. As well, I used to tape English League games for Oilers players when they were on the road, and bring the VHS tapes into them when they got back.

And, for the soccer game, I was on a line with Georges. Outside of the Oilers, our, cough, “all-star” team was a mix of C-list local celebrities and hangers-on. We were playing a team of kids — who also got the team mascot, the Ball Hog, on their side. (Yes, this really happened. It wasn’t an acid trip.)

First shift of the game, and Georges laid off a perfect pass to me. I missed the goal.

Luckily, I got another chance on the next shift. Georges dropped a pass to the top of the area, and I one-timed it through the keeper’s legs. I think the keeper might have been 12 years old.

“It’s a good thing you scored,” Georges whispered to me. “If you would have missed that one I would never pass to you again.”

Now, let’s fast forward to the end of the game — and the Ball Hog.

For those of you with kids, you may have seen Super Why either on CBC or PBS. On that animated show, you may have seen Alpha Pig in action. Now, pump up Alpha Pig with steroids, but leave the googly eyes alone. That monstrosity in your mind’s eye — well, that’s sorta what the Ball Hog looked like.

It’s bad enough that a guy in mascot suit has to try and run around and keep up with players on the field. But, as the time on the clock ticked down, the guy in the Ball Hog suit made a grave mistake. He decided that it would be fun to finish this exhibition match by picking up the ball and charging at us, rugby style.

Now, I don’t know if Georges has a fear of pigs, but when that googly-eyed ham came charging at us, something inside of him snapped. He wasn’t Georges Laraque, good guy — he was Georges Laraque, most feared enforcer in the NHL. Georges clotheslined the Ballhog.

The next thing, we were huddled around guy in a pig suit who was laid out on the turf. Unseeing goggly eyes looked upward.

You see, you might think that, inside the suit, it’s all padded. But you’d be wrong. Being inside a mascot suit is hot, hot work. It’s like wearing five winter coats on a summer day. And, to help the person inside the suit cope with the heat, a little fan was installed in the headgear. As the Ball Hog performed, the fan blew cool air onto the head of the guy in the suit.

But, when the Ball Hog’s head met Georges’s arm, the fan apparatus was mashed into the forehead of the victim.

When the pig’s head came off, the human head was covered in blood.

But he recovered, Georges continued to be the Scourge of God, and I had the memory of that goal.

Now, who says futsal is better than indoor soccer?