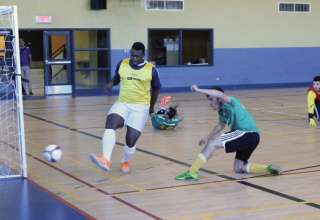 For the first  time, futsal is an officially sanctioned sport in the province of Quebec. The Quebec Soccer Federation (FSQ) launched the Première Ligue de Futsal du Québec (PLFQ) in November, becoming the first provincial association in the country to get involved in the game.

The league, for both men and women at the senior level, is being promoted as “the only path towards the Quebec select teams” by the FSQ.

“A futsal World Cup is coming up in 2016 in Colombia and we want to be part of it in some way,” says PLFQ coordinator Kyt Selaidopoulos. “We want to see if we can put some players on the national team, and help the Canadian Soccer Association to have a better program.”

Efforts to build a development structure are already underway. The Outaouais regional association has also launched its own sanctioned league, and there are ongoing talks to add five more regional leagues next fall.

“There are also plans to start a youth league, possibly at the U-18, U-16 and U-14 levels,” says Selaidopoulos. “And we want to promote futsal. A caravan will go around the province to introduce the sport to younger kids.

“We also want to be able to showcase our senior men’s and women’s talent,” adds Selaidopoulos, who points out that practically all of the players who played this summer for Montreal-area teams in Quebec’s semi-pro league, PLSQ, are in the Montreal conference of the futsal league.

Games are also played in Quebec City. Playoffs and a cup competition will be held and allow teams from both cities to face each other.

Although the Quebec Federation wants to make futsal a more serious proposition, it also wants to “keep it little.” Games are played in high-school gymnasiums, which helps futsal keep its allure as an alternative to 11-a-side soccer.

Futsal is an interesting alternative because it allows some players, who don’t shine as much on the full-sized field, to have their days in the spotlight. That’s like Selaidopoulos himself, who played for the Canadian futsal teams in 2004 and 2012, but was only a back-up player with the Montreal Impact outdoors at the start of the new century.

Futsal also serves as a refresher course on how to handle the ball in close quarters.

“I like it because there’s more action,” says Selaidopoulos. “Futsal is very good for your foot skills.”