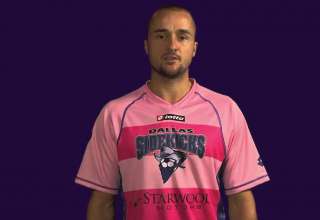 Whether he’s on a field in Quebec or playing in an MASL arena, Frederico Moojen has a knack for to sniffing out goals. But, he’s also working hard to improve the standard of soccer in the province he’s adopted as his new home…

The life of a professional soccer player in the province of Quebec does not begin and end with the Montreal Impact. But, more often than not, it certainly looks that way. Frederico Moojen, a Brazilian-born striker who now makes La Belle Province his home, is working very hard to change that perception.

First of all, Moojen practises what he preaches. The 32-year-old athlete makes a living playing outdoors in the Première ligue de soccer du Québec (PLSQ), the seven- team provincial league which fields pro players along with amateurs and is considered division-three competition, as well as playing indoor soccer south of the border in the Major Arena Soccer League (MASL).

Moojen has settled into this scenario for family and personal reasons, after having had a successful university and PDL career, followed by stints with various USL teams, including the Impact in 2007, and short stays with pro clubs in Poland, Thailand and Oman.

He also tries to lead the way for younger Quebec-based players by holding a yearly combine in the Montreal area designed to match up some of the province’s elite-level players with NCAA coaches.

“After being [in Quebec] for a while, I’d seen a lot of good players, guys and girls, come and go. And I started wondering what happened to them after they turn 17 or 18… The boys, if they didn’t make it with the Impact academy, that was it, it was basically over for them,” recounts Moojen.

So Moojen came up with the idea of referring athletes to NCAA coaches in a structured and dynamic way. He enlisted Antonio Ribeiro, a former Impact player from the team’s USL days, who briefly played in MLS with the San Jose Earthquakes.

“I said, look Antonio, let’s go watch games, invite the best girls and guys we see to come to a two-day camp, and invite coaches from the U.S. to come and watch”, explains Moojen.

“The Impact academy is great. But will there be that many players who make it all the way up to the first team? It’s always better to have options. And it’s even worse for girls, there’s almost nothing for them here [aside from the W-League].”

More options for today’s and tomorrow’s generations: That’s what Moojen believes in. But he also wants Quebec players to have better options later in their lives, after their studies.

Moojen could have elected to continue playing in the USL, but he chose to stay in Quebec in recent years because his wife is from Montreal. He applied for Canadian citizenship, and therefore had to stay in the country for a certain time to keep his status as a permanent resident. He is now a full citizen, but he still considers the MASL/PLSQ combo to be the most viable scenario for him.

“Between PLSQ and the combine, I make as much money than I would playing in the USL,” says Moojen, whose wife is expecting their first child at the end of September. “So to make my wife leave, to make everyone leave for the same salary, it makes no sense.

“So I stay here in Quebec, and I want to help the PLSQ to grow.”

As a kid who grew up in Brazil, Moojen does not understand why the Impact is the only serious outlet in the province of Quebec, and why the PLSQ does not attract even a fraction of the attention that Impact matches do.

“What I see, at least here in Quebec, is that people seem to be content with very little. Since they started the PLSQ in 2012, I haven’t seen the league grow that much. I know things always go slow, that it’s hard to get to the level you want. But the league needs to make efforts to become more professional.

“Every club needs to start their own academy, not just the Impact, so young players can train every day and become better.Clubs need to have their own stadiums, they need to attract more fans in the stands, and put more games on TV. I know it’s hard to do all that, but I’m sure there’s a way.

“I try my best to give as much exposure as I can to the league,” says Moojen, who has been the PLSQ’s top scorer in each of the league’s first three seasons and is quite active on social media. “If every player does a little bit too, if everyone does, the league will grow.”

Showmanship and a will to package the game well is part of what has kept Moojen coming back to the indoor game, which he started playing in 2006-07, when he was named MISL rookie of the year. During the time he tried to make it full-time as an outdoor player – in Poland, Thailand and Oman —the savvy forward, who represents Canada from time to time in futsal and beach soccer events, realized that he missed playing the arena brand of football.

“It’s a fast game, it seems like you always have the ball… And when you score, the crowd is right there.” says Moojen, who was the MASL’s eighth leading scorer last season, with 39 goals and 13 assists in 18 games played with the Dallas Sidekicks, and has joined the St. Louis Ambush for the 2015-16 season. “They build a show around it, games are on TV, on Internet… the clubs treat you like a professional, so I like that.”

Now, Moojen dreams of the day when that kind of atmosphere moves north of the border… even in stadiums not named after the Saputos.