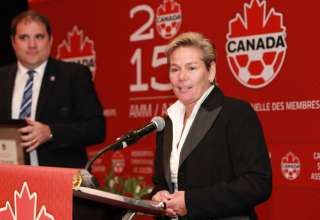 Canadian soccer followers have seen it in World Cup qualifiers and in the CONCACAF Champions League — how the standards of officiating differ between Canada, the United States, Mexico, the Caribbean and Central America. But Canadian official Sonia Denoncourt has been put in charge of the region’s referees — can she create standards that make sure no one ever gets “CONCACAF-fed” again?

Those who can’t do, teach. Right? Nope. Not when it comes to Sonia Denoncourt.

A little over a decade ago, the Sherbrooke, Que. native was on top of her profession as an international soccer referee. Then FIFA asked her to retire at age 40, five years before the age limit, and work for it in order to develop its women’s referee program.

As an on-field official, Denoncourt was having a great impact in establishing the credibility of female referees, notably by becoming the first woman to officiate a men’s first division match in Brazil and by accepting to go into the lion’s cage of a men’s first-division matchup in El Salvador. At that point in her career, officiating men’s pro games in Canada had become routine.

But FIFA wanted her to have even more influence by overseeing and building up the women’s referee program on a worldwide scale, which she did over a 10-year period.

“FIFA basically gave me a blank sheet and told me to write my own job description,” says Denoncourt, who in 1994 was one of the first three women in the world to become a FIFA referee.

“I was the first person to join FIFA staff with the specific goal of focusing on women’s officiating. We were basically starting from scratch,” she explained. “With all the problems we had, our starting point was at about minus-10 in terms of credibility. I tried to build the program up to an entire new level. We had about 100 referees on the women’s side at the time, and built it up to about 800. As the number of women’s competitions grew, we also worked on improving the level of quality of women’s referees.

“And now, the program’s credibility is well-established and there is an entire staff in place at FIFA dedicated to women’s referees. We’ve come very far.”

In 2014, Denoncourt again felt compelled to leave what was a promising, challenging and fulfilling position in order to become director of refereeing at CONCACAF.

Not just director of women’s referees. Director of all refereeing, men’s and women’s.

“When they hired me, the position hadn’t been filled in about a year,” said Denoncourt. “Over the last year, I’ve basically been trying to organize things and put some structure into the program.

“The person that was there before me did a good job, but he was alone. And it wasn’t easy. The CONCACAF structure was recently changed but, until then, the confederation was basically divided in three zones. There was the Central American Union (UNCAF), the Caribbean Football Union, and the North American countries — all basically with their own way of doing things, their own mentality.

“So it was a challenge to get all 41 CONCACAF countries to work with the same vision, the same goals – not only for refereeing, but in all departments,We’re still dealing with that, in the sense that mentalities are very hard to change because they are so deeply ingrained.”

Denoncourt has set out to bring a more uniform approach to refereeing in CONCACAF, in order to avoid the clash of cultures that is very evident to anyone who has followed the Canadian national teams in CONCACAF tournaments as well as their favourite MLS club in CONCACAF Champions League competition.

“The problem in CONCACAF is that each of the three regions has been teaching [to referees] the best it knows how, but according to its immediate and own needs. Which means the messages are different from one place to the next,” said Denoncourt.

“What I want is for all referees to apply the laws of the game in the same way, so that they’re able to perform as well at the international level as they do in their national leagues, and so that we have the same standards from one game to the next. What is a yellow card in Guatemala should also be a yellow card in Canada and Mexico.”

To get to that, Denoncourt has been working with referee assessors and instructors so that they can teach in the same manner all over CONCACAF, which has 300 international referees.

Having travelled to 95 countries throughout her career, Denoncourt is also well aware that being a referee can be intimidating in certain areas of the world. She has been trying to work on that as well.

“For example, before the Gold Cup draw, I met with teams and coaches, I tried to involve them in the process so that they respect the laws of the game as well, and respect the referee’s decisions,” she said.

Denoncourt recognizes, however, that it won’t be easy to get teams and coaches to stop undercutting the officials’ authority so openly on and off the field.

“We’re talking about an environment where people try to show they have power and use threats,” she said. “When a team is not happy, they’re in the habit of sending off a letter to try and scare everybody.

“So it remains a tough environment and it’s been even tougher for the last six months,” said Denoncourt, alluding to the corruption scandals and arrests that have hit FIFA hard, but CONCACAF even harder. Which means leadership at the top has been weak and unproductive at the Miami head office, therefore leaving Denoncourt and other department heads to fend off for themselves.

“It’s been over a year and we haven’t even touched on development yet. But the first step was to put a proper structure in place,” noted Denoncourt.

Denoncourt started out working alone out of Miami, but at the end of this summer she was able to hire two people to work on staff. She also has a few people working for her in smaller bureaus in New York, the Cayman Islands and Guatemala.