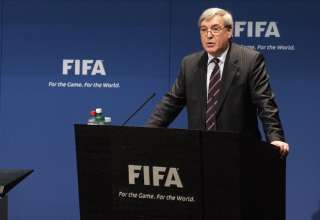 Former CSA president Dominique Maestracci accuses MLS of breaking promises it had made to the association; and he says the relationship with the USSF was not a cooperative one…

The United States is our closest neighbour, so it only makes sense for the Canadian Soccer Association to regularly interact with the U.S. Soccer Federation. But the Americans are not our friends, and trying to be buddy-buddy with them is a mistake, says former CSA president Dominique Maestracci.

Maestracci ran the CSA from 2007 until current president Victor Montagliani was elected in May of 2012.

To illustrate his point, Maestracci makes an allegation based on what he saw at the 2012 London Olympics. Not the one that happened on the field, but another story which pretty much stayed under the radar.

“I was part of the FIFA organizing committee for the soccer tournament at the Olympics,” claims Maestracci. “At the committee meeting held before the tournament – [FIFA President] Sepp Blatter was there, the president of the committee as well, everybody was there – we found out that Canada had made a request to play with a GPS system, which would allowed the team to gather data on the players’ movements. We were told that FIFA had refused.”

The GPS system in question had been approved for use by the teams in their training sessions. Small monitors were inserted into pockets located in the backs of sports bras.

“The vice president for the organizing committee, who was a member of the FIFA executive committee, raised his hand and asked, ‘Why wasn’t our committee informed of this? And who made a decision on this matter?’

“We found out that the decision was made by the head of refereeing and the head of the FIFA medical committee. So we asked, ‘Why wasn’t this decided by this committee?’”

The discussion that followed didn’t change the fact that the decision had already been made.

Maestracci says that when he got back to the hotel, he received a message from the manager of the Canadian women’s program, who wanted to make a request to FIFA about using the GPS in a game situation.

But Maestracci said it was too late to do so, as the meetings on the issue were over.

Maestracci says: “I called [CSA General Secretary] Peter Montopoli and asked him why he didn’t tell me about this before, so I could have made sure that the committee would have acted on it? But it was too late to do anything.”

Then came that infamous game between Canada and the United States, the semifinal the Americans won in extra time. The controversial awarding of a free kick to the Americans for a delay-of-game infraction on Canadian keeper Erin McLeod, the resulting hand-ball call and game-tying penalty kick converted by Abby Wambach weren’t the only dramatic turns of events to transpire that day.

“When our team doctor went to anti-doping with the Canadian players who had been selected, she saw that the American players who were being tested were wearing GPS systems. She told the team, but apparently nothing happened,” alleges Maestracci.

“Considering the CSA had made a formal request that was refused, the CSA had a huge opening to go to FIFA and lodge a protest. If Canada couldn’t use a GPS system, than the United States should not have been allowed to use it either. Simple as that.”

It’s unclear whether the Americans allegedly used the GPS systems with or without FIFA’s permission. What bothered Maestracci was that the CSA apparently did not react after being the victim of what seemed like a double standard. Maestracci says he suspects Canada did not want to run the risk of jeopardizing its ties with the USSF.

“At this level, there are no friends. Do you think if the roles had been reversed, the Americans would have done us a favour?” says Maestracci.“[USSF President] Sunil [Gulati] is also my friend, but that shouldn’t stop anything. The rules are the rules.”

CSA Out of MLS loop

The CSA should not be afraid to rock the boat, says Maestracci, because he says he knows for a fact that the Americans are not willing to do Canada any favours in terms of soccer development.

For instance, when, before the 2011 season, MLS decided that American players on Canadian based clubs would be recognized as domestics, the CSA was not included in the discussion. When he realized that a decision had been made without him, Maestracci decided it was time for a meeting with Commissioner Don Garber.

The meeting was held in Toronto, but Maestracci says Garber sent a league vice-president in his place. Maestracci says that he and then-vice president Victor Montagliani (now the CSA President) demanded that the quota for Canadian players on Canadian clubs be increased.

“The quota was three, but on the overall roster. If it was only up to me, it would be three on the starting 11,” says Maestracci. “It doesn’t do us much good if those three players don’t play. How can you pick a player on the Canadian national team if they don’t even play with their own club? Sometimes, we still select them anyway, because we don’t have a choice.

“We ended up talking about a scenario where the quota of three [on the roster] would go up to four the following year, and then to five the year after that, and to six,” recounts Maestracci.

As per that discussion, the Canadian quota should now stand at six. Yet, it has stayed at three.

“I was convinced we had a verbal agreement,” says Maestracci, who regrets that nothing was put in writing. “Usually, when I negotiate something with another national federation, like I did with France and Italy, for example, I have lawyers write everything up. Not this time.”

So the lesson, says Maestracci, is that business is business, whether you do business with “friends” or not.

“You have to look after the interests of Canadian soccer,” he says. Maestracci recalls a discussion with Gulati about an exchange of coaching services between countries. Maestracci says the USSF President made a joke about Canada wanting to become another U.S. state. “I told him, ‘Fuck you, Sunil.’ That’s how I told him: ‘Fuck you.’

“For me, Canadian interests come before my friendship with Sunil Gulati or other people at the USSF,” adds Maestracci. “They have very good people, Sunil is a good guy, but they have problems like we have, so their own affairs come way before doing favours for Canada.”

Find a Way to Work Together

Maestracci says he believes that Canada should have its own pro league one day, but that day has not yet come – far from it. In the meantime, Canadian soccer must learn to work with the Americans, while continuing to prepare its own future development – a future where Canada will someday be strong enough to go ahead without help from its neighbours.

“We obviously need to have a Canadian league and to go in that direction, so that Canada can stop depending on the United States,” says Maestracci, who was CSA president when the Association’s strategic plan for the country’s future in terms of soccer development was implemented in 2009. “But right now, we only have five pro clubs.”

Maestracci says a Canadian pro league would need to have a minimum of seven or eight teams to kick off.

“If you have five or six Canadian players playing with each of those clubs, that means the Canadian national team coach would have a pool at least 40 players to choose from. And those players would be here, in Canada.

“But I don’t think we’re ready for that yet. At least, with the Women’s World Cup being held this year, we’re going to have stadiums that are up to FIFA standards in just about every region of the country. Our [future] pro clubs will be able to play in those stadiums.”

In the meantime, the CSA must find ways to convince the five existing pro clubs – three are in MLS, two in the NASL – to work for the good of Canadian soccer as a whole, and not just look after their own interests.

That is not an easy task, Maestracci admits.

“The USSF can butt heads with MLS because they have money. But the CSA, unfortunately, doesn’t have that much money,” he points out.

“[The CSA] can’t tell the clubs what to do, because they have no stick, no carrot… So how do you go about it?” asks Maestracci, who says that the relationship between the CSA and the clubs “wasn’t great” when he was president, although it improved when the Canadian championship was created, because clubs needed to go through the CSA-sanctioned competition to face clubs at the CONCACAF level.

Maestracci says the CSA should start by trying to convince the pro clubs to put some of their youth teams in Canadian-based regional leagues — like Toronto FC did in League1 Ontario last summer.

“The clubs say they want to play in American leagues so that their players face high-level competition. They say that the level of play is not good enough in Canada and they are right in saying so,” admits Maestracci. “But the clubs need to realize that they have to plan in the long term. If they never put youth teams in leagues here, the level of play will never improve.

“You can’t let things slide forever. At some point, you have to bear down and make things happen.”