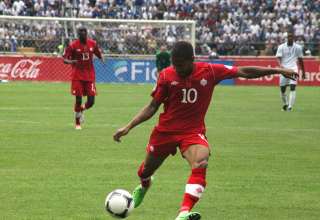 There was so much optimism and hope that this could be the time, but instead it was simply 90 minutes of suffering.

Canada’s hopes of qualifying for the Hex weren’t just dashed, they were firebombed and nuked in the very same place it all officially came to an end four years ago.

The visitors had a few early chances but their back line—usually their strength—put on a simply shocking display as the hosts sent their fans home delirious with glee with an 8-1 thumping of Canada.

Jerry Bengtson had a hat-trick as the Hondurans kept their hopes of reaching their second straight World Cup alive while Canada is sent home with a lot of questions that need answering.

“You want desperately for Canada to do well,” said head coach Stephen Hart. “All I can do is ask the fans’ forgiveness on behalf of the players. I know they’ll never forgive me.”

Just two minutes in, Tosaint Ricketts could have stabbed home a Simeon Jackson cross from close range but instead opted to try to control the ball and had the ball cleared from right in front of him.

Minutes later, the hosts showed Canada how to be clinical as Jerry Bengtson ran onto a flicked on pass after Canada failed to clear. Keeper Lars Hirschfeld raced off his line but the New England Revolution man stretched out his right foot to stab home.

Canada countered quickly and Jackson had a shot go off the post that came back to Ricketts but he couldn’t make the most of the opportunity and, in the 16th minute, Hirschfeld dove well to stop a Mario Martinez shot but it went to an unmarked Bengtson who had an open goal right in front of him and he buried his opportunity.

It was just another indication that Canada is a different team at home than on the road. In this round, Canada got seven out of a possible nine points but in the games that mattered most in Honduras and last month in Panama—that team failed to turn up.

As Canada fell apart, Honduras was ready to pounce. Bengtson set up Carlos Costly who headed home and then Martinez sliced through the Canadian defense to score the hosts’ fourth goal of the first half.

As well as Canada played at home, ultimately the 0-0 draw between these two teams in Toronto where Canada deserved the three points did come back to haunt them as was the fear at the time. Honduras was an example of what Canada wants to do if they want to progress in the future.

“If we can beat these teams at home and you can’t beat them away then you have to draw them away and that’s what they do to us,” said Kevin McKenna who may have suited up for Canada for the last time. “Honduras drew us at home. They weren’t that fit, they weren’t at their best but they still grinded out a result. That game at home got them qualified right now.”

Honduras kept the foot on the gas and just three minutes in, Martinez crossed from the right and depending on who you ask either David Edgar scored an own goal or Costly got his second but really—it didn’t matter who got it as it was long since over.

One thing is for sure — Martinez’s second goal in the 59th minute was an absolute stunner as he curled a brilliant left-footed shot into the top corner and the party in Honduras got that much better.

Substitute Iain Hume got one back on a well-taken free kick in the 76th minute but Honduras responded with two of their own to round off a great day for them and a humiliating day for Canada.

When asked about what happens next for him, Hart didn’t sound like he has much hope he’ll be around much longer.

“I think I have six months left on my contract and I have to really sit down and think about this,” said Hart. “Personally I did my best but with this result I don’t think the country’s fans will forgive me.”

Ever since being appointed, Hart has been popular with the players as a good man-manager of players and, for their part, the players one the field wanted blame to be directed at them and not their bench boss.

“It has nothing to do with Stephen Hart. It was all to do with the players. Stephen Hart had us well-prepared for every game that we were going into and at least since I’ve been in this national team,” said McKenna.

“It would be a shame if they pointed the finger at the coach. It was all the players. We drew Honduras in Canada and we should have won that game and to come down here to lose 8-1 is devastation.”