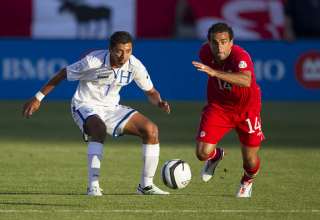 The game that cost Canada a shot at Brazil 2014: The 0-0 home draw to Honduras. PHOTO: CANADA SOCCER/PAUL GIAMOU

After the shell-shock of Tuesday’s afternoon defeat in Honduras, Canadian supporters will surely go on about how badly the team faltered in Central America. We already have an apology on the record from coach Stephen Hart.

With the pain of Tuesday’s beat-down still all too sharp, it’s easy to look at last month’s 2-0 loss to Panama and this 8-1 humiliation in Honduras as the two games that cost Canada its chance to go to the Hex.

But, once the feelings from this loss subside, we will look back at the game that truly cost Canada its chance at the Hex. And that was the June 0-0 draw at home to Honduras. If Canada wins that match, if it takes care of business in Toronto, those two extra points in the Group C standings might have rendered Tuesday’s return match in San Pedro Sula moot.

“Might have” is the key. It’s hard to predict if all the other Group C matches would have finished as they did had Canada earned more points early in the round. Would Panama and Honduras have been content to play for a 0-0 draw as they did on Friday? No one knows.

But 12 points going into that final match in Honduras would have, all things being equal, put Canada into the Hex. Instead, Canada went in with 10.

And that’s the thing about qualifying in CONCACAF. It’s never going to get easier win games in Central America. It’s hard to magically throw a switch and, all of a sudden, see Canada radically improve its road form when it attempts to qualify for Russia 2018. No, what needs to change is our thinking about our home matches.

Seven points out of an available nine might seem like a decent number, but it has proved not to be good enough. Any dropped point at home comes back to burn us.

When it comes to CONCACAF, we are the boy scout. Every other country uses whatever advantages are at its disposal. Mexico schedules games in the heat of the afternoon. Panama’s federation tweets the location of the opposing team’s hotels. Cuba’s groundskeepers, well, Cuba’s groundskeepers don’t exist. Even the Americans do it, keeping qualifiers away from the multicultural venues of Los Angeles and New York, making sure to play at home in Columbus and Kansas City, which also makes the visitors hop more flights to get there.

What I am about to write isn’t meant to be a shot at Toronto; through this phase of qualifying, supporters there have done a wonderful job of coming out to BMO Field and lending their voices to the cause. You deserve applause, not criticism.

But, Toronto is Canada’s most convenient city. Its summer mirrors the heat and humidity of Central America. It is a direct-flight destination for travelers.

As Canadians, we need to be more ruthless. We have to make our visitors travel as much as possible to get to our home matches. We need to make them feel isolated when they are on the road. Bad weather? All the better — this is about qualifying, which is worth millions of dollars. One or two decent gates can be sacrificed.

The argument continues to be made that Toronto offers a convenient spot for the Canadian players to travel, and that it acts as an enticement for them.

We have to STOP thinking that way. It’s cowardly and, really, sort of pathetic. If we need to offer a direct flight to bargain a player to represent his country, why even bother?

Fact is, people I have spoken to from around CONCACAF scratch their heads over this policy. Some have been as bold to tell me it’s… ludicrous. Their sentiment? You schedule home games that matter (qualifiers) to be as tough as possible on the opposing team. That’s not your No. 1 aim — it should be your only aim.

Toronto should definitely get its share of the home spoils. But, when we know we have a tough opponent and need the boost — that’s when we give them our version of Canadian hell. As bad as taking three or four flights might be for our players, as bad as it might be for our players to play a game in freezing temperatures (not 5 C, please, we’re Canadian — we might wear spring jackets when it’s 5 C out, if there’s a breeze), remember that it’s exponentially worse for the visitors.

Before he became president of the CSA, Victor Montagliani stated that Canada should play games in the Yukon if it gave our teams a sizable advantage. Time to follow through.

Who cares if it’s FieldTurf? Good enough for Russia to play on — and it’s not like we are asking the players to pound their legs on it for a full season. Who cares if it’s in a stadium that fits just a few thousand?