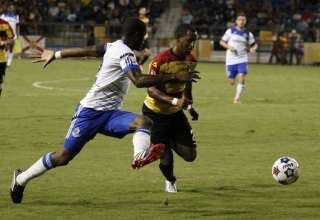 Soccer can be such a cruel game. A hero can be transformed into a scapegoat with just one kick of the ball.

For 83 minutes, Eddies keeper John Smits was the best player on the field in Fort Lauderdale; in a game that the Eddies had to win, Smits made a series of wonderful saves to keep the score at 0-0.

But, in minute 84, the dream game turned into a nightmare. With one very poor touch, the Eddies’ keeper set up the goal that put an end to FCE’s push for a post-season spot. The Strikers got a 1-0 win, which puts the Eddies four points out of the fourth and final playoff spot in the overall standings — with just one game left.

Strikers’ forward Fafa Picault got a head to an attempted chipped pass from FCE winger Lance Laing; Smits had to come out of his area to collect it. He hit the ball first-time, and the panicked clearance went right to Pecka. The Strikers’ midfielder chipped the ball over Smits and into the vacated Eddies’ goal.

Emotionally, it would be easier to lose on a perfectly taken, unstoppable shot into the top corner.

“It was very disappointing to give up the goal in the manner that we did,” said Eddies’ coach Colin Miller. “Especially after we put so much into the game.”

But, he said no single player should be blamed for the result.

The goal overshadowed the fact that Smits made a series of very good saves, and one ridiculous save, to keep the score level. In the first half, with Fort Lauderdale trying to push for the early lead at home, Smits made a diving stop on former Eddie Shawn Chin. He then deflected a Mark Anderson shot just wide.

And, in the 61st minute, Smits’s save on Picault should get save-of-the-season consideration. Picault had a free header, Smits, on his back, reached behind himself to get enough on the ball to deflect it off the underside of the bar. The ball stayed out.

The Eddies created two excellent chances in the first half; the first came off a quickly taken free kick that caught all of the Strikers napping save for defender Rafael Alves. Eddies’ midfielder Ritchie Jones looked to be in the clear, but Alves sprinted back, laid out and blocked the shot.

Later, Kamil Contofalsky parried Jones’ point-blank shot over the bar after some lovely passing from Chad Burt and Tomi Ameobi.

The game was very physical, with the Strikers lobbying for Eddie Horace James to be sent off near the end of the first half for a late challenge that felled Pecka. But a sensibly, a yellow was issued — as referee Robert Sibiga decided not to try and decide what was essentially a playoff game with cards. He made another sensible decision in the second half, when Contofalsky came out of his box and flattened Laing. It would have been hard to call Laing’s run a clear goal-scoring opportunity and, heck, in a game that meant so much, a red card would have been unnecessarily harsh.

While the Eddies won’t be in the playoffs, Miller said the strides the team has made in the fall season — to be in the battle for a post-season slot — has put the club on a path from which it won’t deviate.

“I think the attitude of the players has been fantastic. And that also goes for everyone at the club, from our owners, Tom and Dave Fath, to all the staff who worked so hard to turn this team around. We have raised the bar. We have set a new standard, and we’re not going to back off from that.”