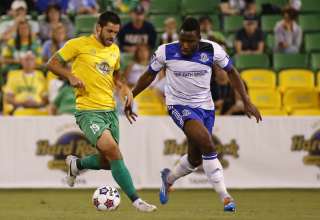 TB vs FCE, one of the games that killed the Eddies this season

When the team you support is eliminated from the post-season picture, it’s normal to look back on the season and obsess about that game where your side was robbed by the ref or that match where your team hit three posts and a crossbar.

After FC Edmonton was eliminated from NASL post-season contention last weekend in Fort Lauderdale, it would be hard to blame an Eddies supporter for not obsessing over the games where points were dropped.

In the end, that supporter should come to the logical conclusion that the Eddies could have easily gone into that game with Fort Lauderdale with an NASL post-season slot already salted away. I’ll look at three games that should have been wins for the Eddies — instead, they only got two points from those matches.

July 13: Ottawa Fury 0, FCE 0
The game was played at Commonwealth Stadium because new turf was still in the process of setting at Clarke Stadium. With pitch-side temperatures at a sweltering 35 C, the Fury went down to 10 men early in the second half. But the Eddies couldn’t take advantage of a team down a man in the heat. But, late in the match, Hanson Boakai’s left-footed effort struck the post. In time added on, Horace James’s effort went off the post.

July 27: Indy Eleven 1, FCE 0
FCE took 28 shots at the Indy Eleven goal at Clarke Stadium. Out of those 28, none went in. Two FCE attempts were cleared off the line. Attempts from Daryl Fordyce, Lance Laing and Michael Nonni hit the woodwork. Cristian Raudales missed a wide open net from a few feet out. After all that domination, the Eddies gave up a suckerpunch goal from Kleberson deep into the second half. It was a loss that defied description — coach Colin Miller lamented that the nature of the missed sitters was “a physical impossibility.”

Oct. 4: FCE 1, Tampa Bay Rowdies 1
The crowd at Al Lang Stadium didn’t catcall in hopes of drawing a penalty kick. When referee Ted Unkel put up his arm in the FC Edmonton penalty area, he was surrounded by Rowdies players, because they were so sure the free kick had been awarded Edmonton’s way. But Unkel pointed to the spot, which led to Tampa’s tying goal in a game that was arguably the Eddies’ best road effort of the season. The Eddies are still looking at the replays, wondering how Unkel could have judged defender Kareem Moses to have impeded a Rowdies attacker. The Eddies have been victims of bad calls before; the human factor is part of the game. But this particular call, which came as the Eddies were surging up the standings, did more harm to the Eddies’ post-season hopes than all of the other controversial calls that went against the Eddies, combined.