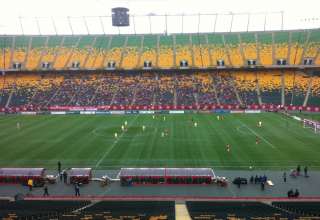 I hate writing soccer-attendance stories. They remind me of the times I used to have to lobby and lobby editors to give a soccer story a little more space, or any space at all.

So, just the writing this column is making me owly and growly.

On Saturday, the Women’s World Cup champions from Japan came to Edmonton’s Commonwealth Stadium to play the Canadian women’s national team. The friendly was announced months ago — and, outside of the rivalry with the Americans, is probably about as “tier one” a matchup as the Canadian Soccer Association could arrange.

The Japanese and Canadian players came out to see a heck of a lot of yellow and green empty seats. In a city that is hosting more Women’s World Cup games in 2015 than any other, a visit from the reigning champions of the world was greeted with indifference. A stadium that holds a little less than 60,000 welcomed an announced crowd of 9,654 who watched the Japanese march to a convincing 3-0 win. But, to the naked eye, it looked like the actual number of bums in seats was much lower than the announced attendance. Half of the stadium was closed to fans. Only 10 sections had fans in them, and they were maybe two-thirds full. Each of those sections has 45 rows, with 16 seats per row. That’s 10 X 45 X 16 = 7,200. And those sections were two-thirds full — so maybe, at best, 5,000 fans in the stadium.

Goalkeeper Erin McLeod, who hails from the area, saw the glass as being half full.

“I heard (before the game) that we had 8,000 sold,” she said. “So at first I was like, ‘huh,’ but, you know, looking at the stadium today, it looked pretty full on the west side. Of course, we always want more but a part of it is us putting on a good game. There were lots of exciting parts to this match. So, hopefully, they were happy and they will come back for the World Cup.”

Tickets ranged between $25-$50; you can argue if that’s steep or not, but Edmonton is a city with a metro population of over 1.2 million, and boasts one of the highest per capita household income rates ($96,030, according to Statistics Canada) in the country. So, $50 puts much less of a dent in an Edmontonian’s wallet than it would to the pocketbook of a Torontonian or a Vancouverite. (As well, there were group and team discounts available.) In Edmonton, people have no problem filling Rexall Place for Oilers games, and a standing room ticket will cost you $65. You’re looking at nearly $400 for a lower-bowl prime seat.

Blame the weather? No. It was 5 C on Saturday afternoon. In this part of the world, sure it’s chilly, but it’s perfectly acceptable autumn weather. This is a city that can bring tens of thousands of out to watch CFL football when the mercury dips well below freezing.

Edmonton soccer supporters love to smugly look back at the 2002 U-19 Women’s World Championship, the precursor to what’s now the U-20 Women’s World Cup, and the final game between Canada and the United States which nearly filled Commonwealth.

Whenever the women’s team comes to Edmonton, it’s always brought up. “How great was 2002? What are your favourite memories?”

And the reason we need to talk about the memories? Because attendances like today’s show that Edmonton likes to live in the past, not the present. This game officially kills the 2002 nostalgia. Sure, we can point fingers at the CSA for not doing enough to promote the game, the local media for being so focused on the Oilers that there is little room for anything else, or the city’s sports fans for simply not caring enough. But, no matter who you think is to blame, the sight of stadium that’s 90 per cent empty isn’t good for this country as we head towards the 2015 Women’s World Cup.

In the summer, Edmonton hosted the Canada-Germany quarterfinal of the U-20 Women’s World Cup. The official attendance was 22,421, on a night where Edmonton Transit suffered a series of snafus that made it very difficult to get to the stadium. More than 10,000 showed up to watch the Germans play the Americans in the group stage of that tournament.

What most of Edmonton’s soccer community missed was a Japanese team that was able to get out to an early lead and then manage the game, before putting it away in the second half.

Canadian coach John Herdman called in left back Alyssha Chapman, who had impressed with her Swedish club team. But Japan’s first goal came after she was caught up the field. The defensive line fell apart, and centre back Kadeisha Buchanan was left isolated in the penalty area. She decided to vacate her spot to try and challenge for the ball, leaving Japanese striker Yuki Ogimi alone to tap a clever pass into the goal.

The Canadians did well for the rest of the first half; and were able to carve out one golden chance. A cross from right back Rhian Wilkinson found Melissa Tancredi in the area, but her header went inches wide. Japanese coach Norio Sasaki said that, had the chance gone in, it may have been a different game.”

“I think we showed our potential for the World Cup. For 40 minutes, 30 minutes, in the first half, there was a real solid showing by Canada…” said Herdman. “When you play against that type of team, and you open yourself up to try and give yourself a better chance of winning, you do leave yourself exposed.”

So, in the second half, the Japanese turned up the pressure, able to outnumber the Canadians in midfield and create chance after chance. If not for some excellent work for McLeod, this would have been a lot worse than a three-goal loss. McLeod made a leaping save to rob Ogimi, and then tipped a Kozue Ando blast over the bar.

McLeod could do nothing to keep Yuri Kawamura’s header out of the goal. After a quick combination on a short corner, Aya Miyama’s cross found Kawamura at the back post.

Herdman took the blame for the goal, saying it was his decision to make some subs before the corner, and that it took the Canadian team out of its rhythm. He said it was a “schoolboy error” on his part.

“Once we’re chasing the game, the game is wide open at that point. You’re going get punished if you go for it. There was no way I was going to lock up the shop.”

McLeod then made another great diving save after Ogimi got in the box by herself, taking advantage of the fact that Canadian defenders Buchanan and Chapman got in each other’s way.

The Japanese added to the Canadian woes, with Nahomi Kawasumi finishing a nice low cross from Saori Ariyoshi.

Tickets for next year’s Women’s World Cup games in Edmonton are reportedly selling pretty well. And Edmontonians have a history of coming out when the games count for something. But, with Canada opening the WWC in Edmonton — and playing its first two games at Commonwealth — it’s fair to start asking some serious questions, and to stop lingering over what this city did back in 2002.

And, to add injury to the insult, Canadian veteran midfield veteran Diana Matheson was seen leaving Commonwealth Stadium on crutches.