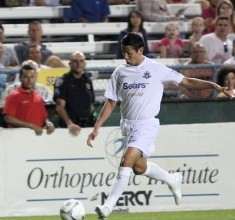 A mix of FC Edmonton players, past and present, will take on the FC Edmonton reserves Tuesday at the Commonwealth Stadium Fitness Centre fieldhouse.

On Monday, FC Edmonton announced the names of most of the members of the team, which is being put together by FCE hometown star Shaun Saiko. The FCE midfielder will be joined by current senior-roster teammates Antonio Rago, Paul Hamilton and Chris Kooy.

The identity of one more player is being held back. That player will be announced just before the game Tuesday.

The recently-released Dominic Oppong will also be on the squad. Ex-Eddies Andre Duberry, Sam Lam and Kyle Yamada — who all were on the Edmonton Scottish team that went to the national finals in 2012 — will join their old FCE teammates. And, Matt Lam, recently released by the club, will also be there.

For those in the Edmonton soccer community, it’s encouraging to see the Lams on the field against FCE reserves. Sam played with FCE in 2011 before being released, and hasn’t been shy with his Twitter account when it comes to criticizing some of the decisions made by ex-coach Harry Sinkgraven. Matt returned from a loan spell at Japanese side JEF United and then endured a difficult season that included Sinkgraven’s decision to suspend him for the final month of the season over an undisclosed disciplinary issue. Lam is expected to look at some trials in the new year.

Seeing players who were recently cut take part in the match against the FCE reserves is an illustration of how pro athletes have to divide their personal loyalties and the business side of the game.

Kurt Bosch, who played with the Drillers in the old indoor National Professional Soccer League, which enjoyed its heyday in the late ‘90s, will also join the squad. Bosch is on the University of Alberta coaching staff. Bosch was part of Canada’s U-20 team in 1994, and went on to play on the national beach soccer team.

But it’s events like this that show off how unique Edmonton’s soccer community is. Players who were raised together remain in contact. You will often see members of FC Edmonton sending tweeted congratulations to homegrown talents like Randy Edwini-Bonsu, Tosaint Ricketts and Asmir Begovic. (For those outside of Edmonton who still bear a Begovic grudge because of his decision to represent Bosnia-Herzegovina over Canada, you might be stunned to find the number of players and coaches in Edmonton who fully support the keeper and closely follow his exploits at Stoke City) Edwini-Bonsu and Ricketts can be found at FC Edmonton matches when they are in their European off-seasons. Begovic sponsored an FCE tickets-for-kids charitable drive in FCE’s first season. When FCE helds its combine in November, Ricketts came down to the Fieldhouse to check out the unsigned talent that was auditioning for the team.