May 21, 2022
9 New Articles
Home CONCACAF Ecstasy and the agony: Larin feels the sting of defeat hours after being No. 1 MLS pick 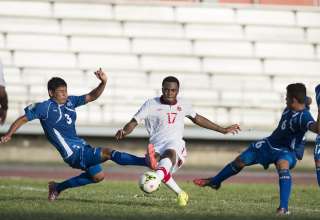 Just hours after being taken first overall in the MLS SuperDraft, Orlando City SC striker Cyle Larin took to the field in Jamaica with the Canadian U-20 side.

And, deep into second-half stoppage time, Larin stood right next to Romilio Hernandez as the El Salvadoran forward buried the dagger-through-the-heart winner off a set piece. Keeper Nolan Wirth made a diving stop off the first attempt in the box. Larin, who was back in the box to help defend the set piece, had the rebound carom off of him before it fell to Hernandez, who slammed the ball in. Final score: El Salvador 3, Canada 2.

“It was a hard ball to handle and it came into the box really fast,” Larin said after the match. “It came over the first line and the ball bounced and it just it me and hit Nolan (Wirth) and it just kept bouncing everywhere and they just put it in. It went right to their player and he put it in. It was bad luck but hopefully in the next few games we’ll put this behind us and get the result we want and hopefully make it to the World Cup.”

With the heartbreaker, Canada’s under-20s now have two losses out of three games in group stage action at the CONCACAF Championships, and their hopes to qualify for the U-20 World Cup now hang by a thread.

Larin — who was one of two Canadians taken in the first round of the SuperDraft; Skylar Thomas went to Toronto FC — enjoyed a robust celebration with his teammates before the game. But Larin and the Canadian offence failed to trouble the El Salvadorans in the first half. Canada had only two shots toward target — and neither were on goal.

With just a couple of ticks left in the first half, a long ball was played up the gut of Canada’s defence. Wirth decided to come well out of goal to get the ball; but he was slow off the mark and was beaten to be ball by El Salvadoran forward Bryan Perez. With one flick of his boot, Perez lofted the ball over the out-of-position Wirth and into the empty goal. Canadian defender Alex Comsia, who had tried to chase down Perez, could only watch.

After lifeless first half, it was a couple of substitutes who brought Canada to life. FC Edmonton’s Hanson Boakai and Vancouver Whitecaps Kianz Gonzales-Froese each scored second-half goals.

Boakai came in at halftime; and less than two minutes into the second 45, the score was level. He gathered the ball on the right side, then beat three defenders as he across the top of the penalty area. When he got the tiniest of shooting windows, he unleashed a left-footed drive into the goal.

And, just a minute after Jose Villavicencio Marinero gave El Salvador the lead back, the Canadians drew level when substitute Kianz Gonzales-Froese scored on what was a mirror-image play of Boakai’s. Froese came in from the left side, shifted across the box, and scored with his right foot.

Froese is with the Whitecaps, but before going there he spent some time training with FC Edmonton.

But, in the dying minutes, El Salvador laid siege to Canada’s goal, with a series of close-range free kicks and corners hemming all of the Canadian charges deep in their own end. Finally, the pressure broke the dam. And, while Larin knew little about the ball that would rebound off of him and out to Hernandez, it’s a safe to say that he may have had the most tainted draft day out of any No. 1 pick in MLS history.