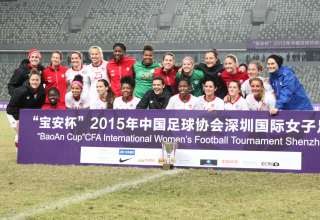 Canada’s final game of the BaoAn Cup was by far the most intriguing of the tournament, even though the Canadian had already clinched the championship.

Why? Because Canada had to face the tournament hosts from China. In a few months time, Canada will open the Women’s World Cup with a group-stage game against the Chinese at Edmonton’s Commonwealth Stadium.

Before the BaoAn Cup, Canadian women’s team coach John Herdman mused that he could approach the game against China in one of two ways — he could play an experimental lineup that might keep the Chinese guessing all the way to June, or play a strong, first-choice team and get the psychological edge by beating the Chinese in their own stadium.

Canada won the game 2-1, with obviously first-choice striker Christine Sinclair scoring twice — one from the penalty spot. Herdman chose to start a strong lineup at least in terms of defending and attacking. But without the services of midfielders Sophie Schmidt and Diana Matheson, he had youngsters Jessie Fleming and Josee Belanger in the mix. Stephanie Labbe started in goal — and Erin McLeod has established herself as the clear No. 1; we’d expect to see McLeod playing the Chinese at the WWC. But, even though youngsters Fleming, Belanger and attacker Janine Beckie got significant minutes, you couldn’t guarantee that those wouldn’t be players you’d see facing China in June.

But, what about the Chinese? While we talk about whether Canada needed to play mind games or not, how did the home team take the game? Well, the Chinese started seven players who also started in a December’s International Tournament of Brasilia 1-1 draw against the United States. Judging China’s lineup in the Canada game against the one it recently utilized in a match with the top-ranked Americans offers the best barometer of their intent. The back line was pretty well unchanged, with the only differences coming in the attacking areas.