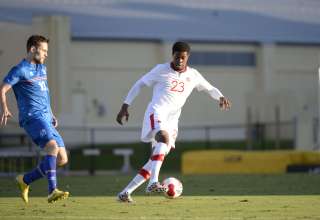 How to analyze Friday’s friendly between Canada and Iceland? That’s a very difficult question.

Sure, Iceland has been a rising power, and its success in Euro qualifying has been one of the great post-World Cup national-team success stories. But, for the first of two friendlies Iceland will play against Canada, the islanders started just two players who were part of the XI that beat the Netherlands 2-0 in 2014.

Meanwhile, Canada brought in a lineup that was a mishmash of selected MLS players, MLS academy prospects, some League1 Ontario talent, a select few guys who play off the continent and, of course, five unattached players.

So, Iceland’s 2-1 win in January Florida conditions that were nowhere near close to being Icelandic or Canadian in nature can be seen, as, well… hmm. A contractual obligation? A chance for Dwayne De Rosario to pad his national scoring record?

Really, for Canadians, that was the lone bright spot. Down 2-0 in the second half and with what seemed like no forward momentum, De Rosario scored his 21st career goal for Canada. On what was an awkward cross into the box, DeRo managed to contort himself so that he was able to get low to the ground and arch backwards so he could make contact with the ball. Going low, not high, for a header — that’s not something you see every day. The ball rolled across the line and coach Benito’s Floro’s charges went back to the task at hand of being toothless in attack.

While Canada was unimpressive going forward, it was far more unimpressive with inattentive play in the back which absolutely gifted the Icelanders two goal. Kristinn Steindórsson scored on free header after a cross came in from the right. He was left absolutely unmarked at back post.

Soon after Canadian Manjrekar James had an effort ruled out because of an offside flag, the Nordic opposition doubled its lead. This time, as a ball bounced in the Canadian penalty area, defender Dejan Jakovic got caught ball-watching, and keeper Kenny Stamatopoulos stayed rooted to his goal line. Matthías Vilhjálmsson took advantage of the hesitation and stabbed the ball across the line with his head.

But, for the most part, this game was hard to watch. And it’s really hard to tell how this affects the national program of either country involved going forward.