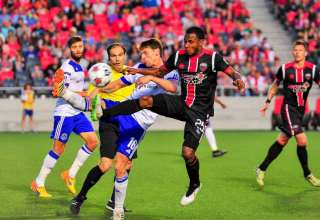 The pattern for FC Edmonton this NASL season has been to start games slowly, then take over as the minutes tick by.

On Friday night, the opposite was true. The Eddies were very bright in the first 20 minutes, but didn’t create a decent scoring chance in the final 70. In the end, the Eddies escaped their trip to Ottawa with a 0-0 draw against the Fury.

“Escape” is the appropriate word, because FCE keeper John Smits, making his second start in a row, made two outstanding point-blank second-half saves, to give the Eddies their first clean sheet of the season — in Cup or NASL play.

First, he dove to palm away a volley from Fury striker Carl Haworth. The ball skipped on the turf, and Smits didn’t have a clean look as the shot came through a couple of defenders.

His second big stop came off Fury midfielder Nicki Paterson, who had a chance from less than 10 yards out after a nice run and low cross from Paulo Jr.

“He’s done very well in both games,” said FCE Coach Colin Miller. “His kicking still needs to improve, it’s not the same as that [Matt] VanOekel kick, but in the game Smits has been in, he’s made the saves, it’s been a benefit to the team.”

While Smits helped the Eddies to their first clean sheet of the season, the Eddies were also shut out for the first time this season. And, really, after the 20-minute mark, FCE did nothing to worry Fury keeper Romuald Peiser. Really, the best chance came just a few minutes after the opening kickoff; Sainey Nyassi made a nice run down the right side, and then pushed the ball to the goalmouth. Ritchie Jones spun and attempted to shoot, but whiffed when he had Peiser at his mercy.

Frank Jonke, starting in place of injured striker Tomi Ameobi, lashed a decent left-footed drive towards goal at the 20-minute mark, but Peiser was able to palm it away.

After that, the Fury controlled the tempo and had the territorial advantage but, for the rest of the first half, the story was shots that went high, shots that went wide.

In the second half, the Fury kept pressing; and, right back Ryan Richter was able to get the measure of Eddies mercurial winger Lance Laing; and, with Laing’s influence on the game limited by Richter, the visiting team’s ability to hit on the counter was stripped.

Playing its last home game of the spring season — as TD Place will be taken over by FIFA on the weekend in preparation for the Women’s World Cup, the Fury was able to create chances; but, when called upon, Smits was there.

As always seems to be the case when the Fury plays, there was a controversy in the box; a goal-bound shot hit Eddies’ midfielder Cristian Raudales, and the home team made claims that the ball had gone off the arm. But, the whistle wasn’t blown — and the Fury were left to rue the chances that were missed or saved, including a volley from Sinisa Ubiparipovic that fizzed over the bar right after the unheeded penalty claim.

The Fury and Eddies have identical 2-3-3 records. But it was a case of Ottawa’s third-best defence shutting down the league’s top offence.

Miller said that he and the coaching staff feared that the Eddies, who have had the burden of a Cup run and a short week with a cross-country trop (the Eddies played Sunday, then were back at it Friday in Ottawa), would be tired. They were right.

“To be honest, what we saw out there tonight, we sort of expected it. With the amount of games we’ve played, the amount of travel, there were a lot of dead legs out there.”

LAING
Miller said the Jamaican Football Federation still hasn’t told the Eddies if Laing will be on his country’s final roster for the Copa America and the Gold Cup.

But he’s hopeful that, if Laing does get the call, that he’ll be allowed to stay with the Eddies for another week.

“Right now it is looking positive that the Jamaican Football Federation wants to work with us, and we are hopeful that Laing will be with us for the Tampa game.”

The Eddies will not return to Edmonton this week. With Women’s World Cup making practice fields scarce, FCE will spend the week in Florida to prepare for next weekend’s match against the Rowdies.