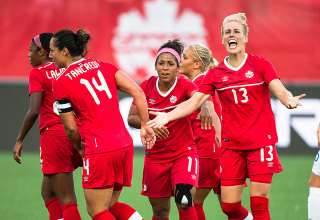 The Sophie Schmidt show was good enough to beat England. She scored a fantastic goal from just outside the penalty area, had a free kick fly just inches over the bar, and had a good attempt off a short-corner set piece.

Schmidt’s goal was enough for a 1-0 Canadian win over England in front of a sold out Tim Hortons Field in Hamilton.

There was a festive atmosphere and it was a feel-good win in Canada’s final tune-up ahead of next weekend’s World Cup opener.

But, the joy of a win in front of a big crowd can’t obscure one uncomfortable truth; that, outside of Schmidt, Canada created very little going forward. Christine Sinclair was crowded out by a packed English midfield. Adriana Leon spent much of the game as a peripheral figure. And Melissa Tancredi was a physical presence, but her runs into the penalty area weren’t in sync with the service that was provided to her.

Make no mistake; if Schmidt continues to be the top offensive threat for Canada at the World Cup, it’s a sign that we could be in a lot of trouble. Most of the time, you’re simply not going to get the kind of wonder strike that Schmidt provided. You’re usually not going to get away with getting only a couple of quality looks at goal over 90 minutes. To do well at a World Cup, you’ll need ugly goals, team goals, the kind of goals that come after periods of sustained pressure. You’ll need seven or eight good chances in order to get the goal you need.

Leon and Tancredi may have the most pressure of all to perform; if Sinclair continues in the attacking midfield role, she will often face packed midfields that look to crowd her out, as England did on Friday.

Schmidt’s 22nd-minute goal was a thing of beauty; off a Canadian throw-in, right back Josee Belanger thumped an awkward, bouncing pass across the top of the box. But, Schmidt was able to put her foot through the ball — and it flew into the top corner.

But, Canada came very close to paying for its failure to add to the goal total. In the dying minutes, English sub Fara Williams’s 30-yard attempt to chip Canadian keeper Erin McLeod came back off the crossbar.

Sure, there were positives for Canada; Belanger, pushed into the right back slot because of an injury to Rhian Wilkinson, was able to get forward. At left back, Alysha Chapman was once again able to run miles up and down the sideline. But their work will go for naught if there aren’t strikers to get on the end of crosses from the wings.

And remember that this 1-0 win came on the heels of a 0-0 draw with Nigeria. So, with a week to go before the curtain-raiser in Edmonton, we have every right to wonder if this team has enough goals in it for a final-four run.