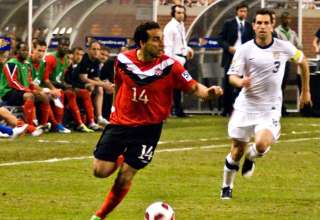 The U.S. stormed their rivals in the opening 15 minutes and were gifted an early goal before Canada could settle down in Detroit.

The red and white played a much better second half, but big plays at the right moments for the Americans were key to a 2-0 victory Tuesday in the Gold Cup opener for both sides.

Canada was hoping to avenge its 2-1 loss when the two teams last met in the 2007 Gold Cup semifinal, but was thwarted. The U.S. used its two-pronged attack of Jozy Altidore and Juan Agudelo, with Clint Dempsey sneaking in from time to time, as well.

The Canadians wanted to press the U.S. and keep the ball in front of them, but rarely executed. Goals from Altidore and Dempsey paced the U.S. attack in Detroit in front of 28,209 fans at Ford Field. The meeting was fourth time the two countries have played one another at the Gold Cup with U.S. increasing its head-to-head total to three wins and one draw.

The Americans also continued its streak to have never lost a group-stage match at the tournament.

“Congratulations to the United States,” said Canada head coach Stephen Hart. “I thought they came, what we knew they were going to do and come and press us early and try to get the early goal and they got it. Once we went behind, we took way too long to settle down

“I think it’s a overall team thing. Too many players didn’t want the responsibility of the ball, we were a little slow closing down the ball and the energy level wasn’t high enough. When we did get it we moved the ball too slow, we were very predictable.”

With Canada starting the game slowly, the Americans played with pace and used their size and speed in the first 20 minutes to get into open areas in the Canadian half. Altidore and 18 year-old Agudelo were at the front of the 4-4-2 formation and caused havoc for Canadian defenders. In the second half U.S. keeper Tim Howard made big saves to prevent Canada getting on the scoresheet.

“The way we started the game, obviously playing in the U.S. with them having home field advantage, we knew the first 15 minutes were going to be difficult. They put a lot of pressure on us,” said Dwayne De Rosario. “Howard came up with quite a few big saves and that’s what makes them the team they are. They have a lot of key players making big plays in important parts of the game and you saw it tonight.”

Added Canadian midfielder Atiba Hutchinson, “I think it was the first 15 minutes — we came out flat today. They came in put a little pressure on us and I don’t think we dealt with it as good as we should have and I think we built ourselves back into the game and did some good things and created a little bit of chances but I think going from here, in the next game we need to do a little bit more.”

Another factor in the game that both teams had to deal with was the condition of the pitch. The natural grass surface was only laid down the day before and both teams were definitely not happy with it. The ball would barely bounce and kept it from moving as quickly as it does on a normal pitch. As the game wore on the grass started to get chopped up — but nobody used it as an excuse since both teams were at the same disadvantage.

“No, I think both teams are playing on the same pitch, we’ve played on those before and they’re always difficult when they lay over turf but it’s the same for both teams,” said Hart. “It was a dead pitch, a very dead pitch and I thought we adjusted better to it in the second half because we tried to get the players to play deeper balls because we knew it wouldn’t run off the field. But both teams are on the same pitch, the pitch is not an excuse.”

With the Americans keeping the ball helmed in Canada’s end, the U.S. continued to build pressure and create opportunities from the opening whistle. However, the Canadian defence played well by blocking shots and clearing the ball out of harm’s way. In the 12th minute, defender Michael Bradley fired a hard pass to Carlos Bocanegra but his hard touch sent the ball over the goal. Bocanegra had Canadian keeper Lars Hirschfeld at his mercy, but it was a missed opportunity for the Americans.

The U.S. was able to captialize in the 15th minute, when Altidore found space on the right side and fired a bad angle shot that somehow eluded Canadian keeper Lars Hirschfeld. The shot should have been easily stopped but instead the Americans were gifted an early 1-0 lead.

The game slowed down considerably in the middle part of the first half as Canada tried to settle into the game by clogging the midfield. However, with the U.S. already ahead 1-0, the Americans were content to sit back a little and wait for its chances to press forward.

Canada got its first good chance in the 34th minute when De Rosario nearly converted on a long-range strike from 30 yards out. The shot curved just wide of the right post but Howard likely would have made the save.

Agudelo nearly got the best of Hirschfeld in the 40th minute with a tricky strike with the outside of his foot but the Canadian keeper stretched to make the save. Less than a minute later, Agudelo was at it again, this time from 25 yards out on a shot that deflected off a defender and nearly fooled Hirschfeld, but the keeper came up with another big save.

Canada played a much better second half and had moments where it controlled the play while creating chances up front. But the U.S. extended its lead in the 62nd minute when a Altidore made an inspired run into the Canadian 18-yard box. He provided a perfect cross over to Dempsey who slid and knocked the ball past Hirschfeld — who was out of position — to increase the lead to 2-0.

Second-half substitute Ali Gerba had an immediate impact when he entered the match for Will Johnson. He was stopped by Howard on a couple of occasions including a brilliant save in the 85th minute to preserve the clean sheet for the U.S.

Hart thought if his team can play more like it did in the second half Canada will have positive results in the rest of the tournament.

“I honestly felt we played a much better second half. We adjusted really, really well. We didn’t create that many chances but when we did create were very good. We know what we need to do and if we come out and play like we did in the second half we’ll get results for sure.”

Added De Rosario: “The way we played all around, I think we can walk away with our heads up despite giving up two goals. There’s a lot of positive to take out of this game as we move forward to Guadeloupe and Panama.”

Canada will face Guadeloupe next in Tampa Bay on Saturday while the U.S. plays Panama in the second match on the same day.