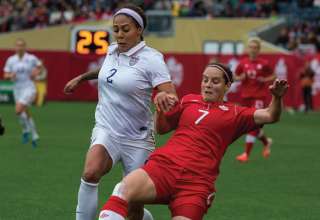 At first glance, you’d think that moving to the W-League from the NWSL represents a major step down. But, Canadian national-team veteran Rhian Wilkinson opted to leave the Boston Breakers behind and return to her native Quebec. Now playing in Laval, she speaks about her decision to leave Beantown and her future in the game…

Rhian Wilkinson won’t come out and say it directly, but she dreams of the day when the National Women’s Soccer League will have franchises north of the border so that Canadian players finally get to shine their brightest.

And, also, to ensure that up-and-coming Canadian players won’t have to endure what she had to go through with the Boston Breakers.

Canada’s mainstay at the position of right back says flat-out that she will not tell the full story of why she chose to leave the Breakers over the winter, and now prefers to train and play part-time with the W-League’s Laval Comets in the Montreal area. But when she broaches the broader subject of the NWSL going north, she gives a bit of a glimpse of the rationale behind her decision to go back to a lower-level league.

“I do hope that, in the end, there will be Canadian teams playing in the NWSL. I think it’s logical. We have MLS teams (in Canada),” Wilkinson points out. “I’m a Canadian and it’s only normal that I would want to play soccer in Canada in front of my fans. But things are not quite there yet. So right now, we’re supporting the league (NWSL), and I’m pleased to do that.”

Wilkinson acknowledges that having Canadians playing for U.S.-based teams in a league that exists first and foremost for the development of American players is not an ideal situation from a Canadian perspective.

“There’s definitely a difference in how we play the game,” says the 32-year-old Montrealer. “The Americans are phenomenal athletes. These women run non-stop, back and forth, back and forth… They’re the best in the world at it.

“On a lot of the (NWSL) teams, the Canadians are star players, and I think a lot of people have been surprised by that… But in other situations, we do play differently, so occasionally it has perhaps given way to a lack of minutes, or being played out of position.”

Although she became last March the third player ever to make her 150th appearance with the Canadian women’s national team, Wilkinson only played 14 of the Boston’s 22 games over the 2013 season. She earned 11 starts and 913 minutes of play on a team that finished fifth in the standings with a 8-8-6 record.

“It was better for my development as a player, and in order to be as ready as I possibly can for Canada, to not be playing in the States”, she says, adding that it was her own decision to leave, and that the Canadian Soccer Association supported her “in every way.”

“I think the NWSL is fantastic, I really do. There’s a lot of work to be done, it’s a new league. But for me in Boston… They wanted me to come back, and being traded didn’t seem to be an option. There weren’t that many avenues to chase over there… And personally, I wasn’t comfortable with living in the United States at this point in my career.”

Wilkinson quickly adds that she “really got on with everyone” on the Breakers team.

“It was not an acrimonious departure, it was all done very professionally”, she says. “But for me, the decision was to not go back. I felt that I could train with a W-League team, and on my own, with a very specific plan from the CSA, in a more streamlined fashion, that would allow me to be better for the national team.”

Wilkinson will play and train with the Comets, who practise two to three times a week, in addition to following her own personalized training program.

“I know what I have to do on a daily basis to be able to peak at the right time. But there are no substitutes for games,” she points out. “The W-League is providing me with a wonderful opportunity to play with young, up-and-coming players. It’s giving me time out on the field and that’s fantastic — that’s exactly what I need.”

“As a right back, we try to involve her in the play as often as possible,” says Comets head coach Cindy Walsh. “When she’s there, it gives confidence to everyone on the field.

“And that’s what is important for me right now, that everyone plays with confidence,” adds Walsh, the 2013 W-League Coach of the Year  whose team is aiming this season to finish on top of the Central Conference and reach the W-League playoff final for the second year in a row. Wilkinson will miss some games, however, due to her national-team duties, but also because she will be spending time exploring coaching opportunities.

“I’ve been helping out with the U-20 women’s national team, and I’ve also been doing a lot of coaching certification,” she says.

Wilkinson missed Laval’s May 31 game in Quebec City in order to join the U-20s for a 10-day camp in Burnaby, B.C., where she was part of head coach Andrew Olivieri’s technical staff. She will also be off to Europe, later on this year, to pursue her UEFA B coaching licence.

“I don’t know if I want to be a coach. But I really want to use this year to be as productive as possible on that front,” says Wilkinson, who chose to join Laval in part because she knew the Comets organization would allow her to pursue other interests. “Cindy Walsh is a good friend, I knew I’d have her support. Because she’s played for the national team, she has a very good understanding of the commitment I’ve made to other things.”