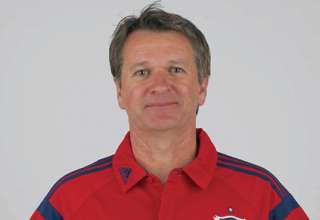 Frank Yallop was widely expected to take over the reins of the Vancouver Whitecaps; instead, the former Canadian national-team coach chose to steer the Chicago Fire. In this interview, he tells us why he chose the Windy City, and how he hopes MLS can help Canadian soccer in the future…

It is the end of the 2013 MLS season. The Vancouver Whitecaps announce that coach Martin Rennie won’t be back. Pretty well everyone in the Vancouver sports media predicts that Frank Yallop will be the new man in the Vancouver coach’s box.

Really, all that was left was the Whitecaps to hold the press conference to introduce Yallop.

But, the Yallop announcement never happened.

Even though he’d been interviewed for the Whitecaps job, Yallop received another offer that he simply couldn’t turn down. Not only would Yallop become the head coach of the Chicago Fire, but the director of football as well. He’d not only be leading the players on the field, but the offer from Fire owner Andrew Hauptman guaranteed that the Canadian coach would be making all the front-office decisions, as well.

After the 2013 season, Yallop met with Hauptman. And Hauptman was quite clear. There wasn’t going to be an interview process. There wouldn’t be a long list of candidates. Hauptman wanted Yallop to steer the franchise.

Being offered the job right off the bat, along with the keys to the kingdom, was simply too good a deal for Yallop to turn down. Why would he wait for the Whitecaps to make a decision, when he had a fantastic job offer staring him in the face? Yallop took the Fire job, and the Whitecaps moved on, choosing to promote Carl Robinson from the assistant’s job to the head coaching position.

“He [Hauptman] offered me the job right away,” says Yallop. “Chicago is a good team, it has been in the league since ’98. And, right away, Andrew made me feel welcome.

“They [the Whitecaps] were quite reasonable, but they were doing their due diligence, going through interviews. But when you have someone offer you the job straightaways, you’re going to take it. I think it worked out well for Vancouver, too. I think Carl Robinson is a great coach. I know Robbo as a coach and a player and I think he’s going to do a great job. It worked out well for all parties.”

Midway during the 2013 season, Yallop and the San Jose Earthquakes came to the mutual decision that he should no longer coach the club. The year before, Yallop led the Earthquakes to the best regular-season in MLS, thanks to the goal-scoring exploits of Chris Wondolowski, who tied the league record for most tallies in a season, with 27.

But pro sports is cruel; and when the Earthquakes stumbled out of the gate in 2013 — and Wondolowski’s production dropped off — Yallop was the one who departed.

At the end of the 2013 season, Watson had the “interim” tag removed. Now that Yallop is once again employed, that makes two Canadian head coaches in MLS. Add to that the fact that there are three Canadian head coaches in NASL — FC Edmonton’s Colin Miller, San Antonio Scorpions’ Alen Marcina and the Ottawa Fury’s Marc Dos Santos — and you could argue that, while the Canadian national team struggles, the country’s coaches have never been better represented at the pro levels of the game.

“We have a lot to offer, from all the professional environments we’ve played in,” says Yallop. “I know that Mark is an excellent coach, and Nick Dasovic [the former Canadian national teammate of Yallop’s is now the assistant in San Jose] too. I’ve played with them, coached with them. We have good coaches in Canada.”

But Yallop still has the best résumé among the five. In 2001 and 2003, he coached the San Jose Earthquakes to MLS Cup titles. He then went to the Canadian national team, but returned to MLS in 2006 to take the Los Angeles Galaxy coaching job. After parting ways with the Galaxy in 2007, he moved back to San Jose, to work with the expansion franchise that inherited the name and the history of the Earthquakes team he’d previously led to glory.

Add to that more than 50 national-team caps as a player, almost 400 appearances in English football with Ipswich Town and more than 80 games with MLS charter member Tampa Bay Mutiny, and you have a pretty damn impressive career in the game of soccer.

Yallop returned to North America to play with the Mutiny in the first-ever MLS season, the 1996 campaign. Teams played in National Football League stadiums that only had a few sections filled for soccer matches. MLS teams had no real structures; they were basically a collection of first-team players, with no reserves, no development pathways for young players.

During the interview, I ask Yallop to think back to 1996, and he admits that the Frank Yallop of 18 years ago would simply not believe MLS would evolve at the rate that it has.

“No. It’s come a long way. When I got here, there were some great players, but there were no academies, most of the best players weren’t American. But now, you look at the league, everyone has academies, the infrastructure is there, and most of the league’s great players are Americans… I think a great example for the Chicago Fire is Harry Shipp. He played with the academy and then went to Notre Dame for four years. We bring him back and he’s a homegrown player. And a homegrown player is someone who really wants to be at the club. Chances are he’s a hometown player, he’s wanted to play for the club, he watched the club.”

Shipp, a rookie, scored a hat trick in Chicago’s first win of the season, a 5-4 decision in May over the New York Red Bulls.

“It’s [MLS] on a steep incline,” says Yallop. “I would never have imagined then what it has become today. I think a lot of the credit has to go to [Commissioner] Don Garber to push this league forward.”

But, Yallop would like to see MLS have the same kind of effect on Canadian soccer as it’s had on the American game. Yallop was  Canadian national-team regular throughout the 1990s. And while Canada never qualified for the World Cup in those years, that group of players were at least able to score goals. From March of 2013 to May of 2014, the Canadian national team couldn’t score a goal — and went goalless in three Gold Cup matches.

“Now, with three Canadian teams in MLS, I hope they can do for Canadian soccer what the league has done for American soccer,” says Yallop. “Hopefully the new coach [Benito Floro] will be able to build the program back to what it should be. When I played, we were competitive in CONCACAF.”

While Yallop pines for Canadian success, he doesn’t have a direct hand in what happens with the national program. But, with Chicago, he has full and total control of the franchise. He doesn’t have to answer to anyone but the salary cap in terms of building the team. It’s a freedom he likely would not have received in Vancouver — where the coach is part of a decision-making committee. For Yallop, the freedom that comes with being both coach and director of soccer reminds him of his early days of coaching in MLS — which, ironically, were his most successful times in the league, with two championships in three years.

“From 2001 to 2003 in San Jose, I made all the soccer decisions. So, now, if I think that there is a certain type of player I think we need to get, we can go out and get him. But, it’s a work in progress. Until you you have a chance to bring in players you like, style-wise, you get on with what you have.”

When Yallop speaks to the magazine, it’s late May. The Fire has won just two of its its first 10 matches and hasn’t kept a clean sheet. But, the team has only lost two of those 10 matches, with scoring draws being the story of its season.

With the early success of Shipp and the exploits of reigning league MVP Mike Magee, the Fire has developed into a team that’s more offensive than defensive. And, in MLS’s weaker Eastern Conference, there is time for a team to work itself out – it’s hard to be buried in the playoff race because the middle of the Eastern standings is so compact. If the Fire can find a way to reduce the goals against, it’s a team that could make a move as the season goes on.