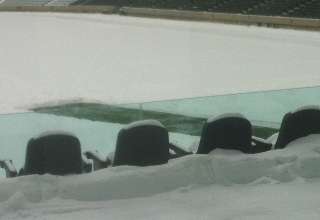 Snowbanks were piled several feet high along the sidelines, as another layer of the white stuff blanketed the field. A new scoreboard was under a grey curtain, waiting to be unwrapped.

But, even on a cold March afternoon, soccer officials from around the world could imagine what Edmonton’s Commonwealth Stadium would look like when it hosts U-20 Women’s World Cup matches in August of 2014 and then the opener of the Women’sWorld Cup in 2015.

At the tail end of winter, technical staffs from the United States, Brazil and China visited the stadium and looked at the artificial surface. Their U-20 teams will all play in Edmonton this year.

“Most of the women’s teams play on natural turf at home,” said Fred Li, a spokesman for the Chinese team. “We don’t think it will be a problem. It’s the same for all the other teams. Yes, more of our players are interested in playing on a natural surface. But the international game has approved the artificial turf. I am sure FIFA has got their reasons and we have to stick to their decision.”

James Moorhouse, the technical director for USA Soccer, said Edmonton is special to his side. In 2002, the United States beat Kara Lang, Christine Sinclair and the Canadian team in the final of the U-19 Women’s World Championship, the forerunner to the Women’s World Cup. Commonwealth was packed as the home fans hoped for the upset.

But, unfortunately for those tens of thousands of fans, the script went pretty well exactly as it was drawn up.

“We knew going into the competition that Edmonton would be spectacular; in a lot of ways, we feel like we’re at home.”

Even though Canada won’t play a group stage game in Edmonton at the U-20 Women’s World Cup, it could be involved in an Alberta quarter-final if the results break just right for the organizers out west. But Trish Zimmerman, the venue manager for Commonwealth, isn’t worried.

“Really, we could not have asked for a better draw if we weren’t going to get Canada,” Zimmerman says of the U-20 schedule. “With the U.S., Germany, Brazil and China, we have some major soccer nations. With the U-20s, what people are going to see are the stars of the future. Some of these players are going to be back here next year for the World Cup.”