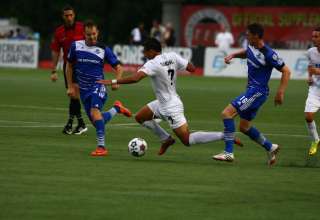 A second-half free kick from Pablo Cruz represented the margin of the Atlanta Silverbacks’ 1-0 victory over FC Edmonton.

But, the real culprit Saturday night in Atlanta was the Eddies’ lack of inventiveness or finishing in the final third.

In last week’s 0-0 draw with the Ottawa Fury — a game which saw FCE coach Colin Miller bemoan his team’s lack of intensity — the Eddies could at least boast that they hit the woodwork a couple of times. They didn’t get that close in Atlanta.

It took until the 82nd minute for the Eddies to force Atlanta keeper Joe Nasco into a meaningful save. Just two minutes after coming in as a late sub, FCE teenager Hanson Boakai won a physical battle with Atlanta’s Kwadwo Poku at the top of the box, and then left-footed a curling shot towards the top corner that forced Nasco into a fingertip save. Yes, Nasco had to catch a couple of balls that were directed right at him earlier in the game, but the Boakai effort was the first chance that put the keeper to work.

And all this against a team that, before Saturday, could not boast keeping a clean sheet in NASL action this season.

The Eddies did have a few looks at goal. In the 32nd minute, striker Frank Jonke was able to blow through four defenders up the gut, but, when he had a clear look at goal, he screwed his shot wide. Early in the second half, Kareem Moses had a good luck on a set piece. After the ball was headed across goal by Albert Watson, it fell just out of Moses’s reach.

Horace James, one of three Eddies making a return to Atlanta, had two chances. He headed one over the goal. And, after an Atlanta giveaway, he had the chance to finish a great cross from Eddie Edward, but that side-footed effort went wide, too.

For a team like the Eddies, who have struggled to score goals outside of one six-goal romp against Carolina in the spring season, it’s important for the attackers to at least test the keeper when the chances come. But, at the end of the night against one of the worst defensive teams in NASL, only Boakai could boast that he forced Nasco to work hard.

“I thought Nasco was excellent tonight,” Miller said. “But, I also think that Big Joe could have played for the U.S. national team for the way that we were putting crosses into his hands. It’s frustrating. I think Atlanta had two chances all game long, and they scored on one of them.”

The Eddies, as per usual, were organized and hard to break down. But when the offence can’t produce, the opposition can afford to be patient at 0-0. And, eventually, chances will come.

In the first half, the Silverbacks had one decent look. After a series of a couple of corner kicks, Atlanta forward Junior Sandoval got a look at goal, but his attempt was blocked by Moses.

In the second half, a good cross from Atlanta fullback Mike Randolph allowed forward Jaime Chavez to get inside of Eddies’ centre back Beto Navarro, who was acquired from Atlanta a week ago. That put Chavez in alone on goal, but Eddies’ keeper John Smits was able to come off his line to smother the chance.

It looked like that might be the save that would at least allow FCE to escape Atlanta with a single point. But a free kick from Cruz, struck from just outside the box, eluded him with about 15 minutes left in the match. Smits dove to his right and looked to get his hands to the ball, but didn’t make enough contact to knock it away from goal.

“We had a good look at it and it looked like he got two hands to the ball,” said Miller. “I’ll have to look at it again on TV before I critique it, but it did look like he got his hands there. But that was the difference in the game. He curls a free kick over the wall. It was a poor free kick to give away.”

Silverbacks coach Eric Wynalda, in his last game pulling the strings for the club, said the bench was screaming for Cruz to take the kick after Watson was judged to have fouled Poku just outside the area.

“We were screaming from the bench, he does it so many times in practice.”

Wynalda will remain Atlanta’s technical director, but his TV commentary schedule has become a lot busier, leaving him less time to look after the day-to-day affairs of the Silverbacks.

Milton Blanco, the third former Silverback to find his way to the Eddies, also got into the game as a sub. But for Navarro, Blanco and James, it was a very unhappy return to the Peach State.

And, with two games gone in the fall season, the Eddies have yet to score a goal.

“There isn’t anything more we can do in training,” said Miller. “Day in and day out we put the players in positions where they can score. You see the quality of our attacking in our training sessions, and then we come here and we don’t come away with anything. It is disappointing”