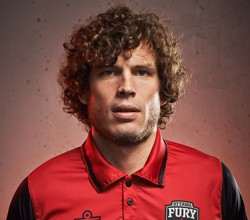 The Ottawa Fury welcomed 14,593 fans through the gates of TD Place Sunday, setting a new attendance record for the modern NASL.

The fall-season home opener marked the first time the Fury had the chance to play in the brand-spankin’ new stadium. And, with the most recognizable team in NASL, the New York Cosmos, providing the opposition, it was a formula for a very good gate.

But, as the Fury had reportedly had 13,500 tickets sold a week ago, there wasn’t a huge push for seats in the week leading up to the game. So the question remains, how will TD Place look when the Fury hosts NASL games later in the season? The one danger of playing in large multipurpose stadiums is that even if you get a crowd of 7,000 or 8,000 — which is excellent by modern NASL standards — the stadium looks and feels kinda empty.

Despite the hype created by the day’s attendance number, the Fury finish the second week of the fall season with a ledger that looks a lot like FC Edmonton’s — one point to show for its first two games, and no goals scored.

And, like FC Edmonton, the Fury can blame a lack of finishing touch.

Before the Cosmos got the game deciding goal late in the first half, the Fury had a couple of wonderful chances fall to striker Tom Heinemann; on both occasions, he decided to aim his efforts rather than try to have a good go at goal. In both cases, what resulted were tepid efforts that did little to trouble Cosmos goalie Jimmy Maurer.

The Cosmos goal came soon after those two missed chances from Heinemann. Fury central defender Omar Jarun — who has been one of the most disappointing signings in NASL this season — made an awful clearing pass, which went right to New York’s Sebastian Guenzatti at the top of the box. Guenzatti fired a low drive into the corner of the Fury goal.

New York had the best chance of the second half, as Hans Denissen struck a shot off the bar after a cross got behind four Fury defenders. But Tony Donatelli had a chance to get the equalizer for the Fury, but had it blocked off the line. Later, Heinemann had another great chance to tie the game, but volleyed a cross just wide.

The Fury did well to create some openings against the NASL’s stingiest defence. But, in a script that follows what’s happening with the other Canadian NASL team, when the chances came, the attackers didn’t do enough to trouble the opposing goalkeeper.