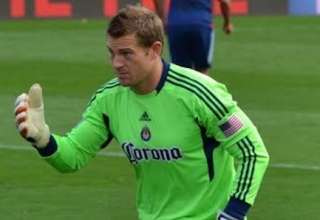 The Montreal Impact’s midweek trip west to Carson, their second of five games in a fortnight to finish the month of June, did not result in the team hitting paydirt.

The Goats dictated the pace early on and spent the bulk of the first half hour in the Montreal end. Challenging early, forward Juan Agudelo, had the first opportunity for the home side but was denied by a sliding Jeb Brovsky tackle. Moments later, Agudelo’s centering pass found Alejandro Moreno — who put a right-footed shot behind Donovan Ricketts and into the Impact net, recording his second tally of the season in the 14th minute.

The visiting Impact, unable to link up or move the ball effectively until shortly before the interval, managed to counter their host’s offensive forays until showing some offensive spark in the 38th minute, when rookie forward Andrew Wenger took a through ball in on the Chivas net only to have Dan Kennedy come out to meet and beat him. A minute later, the veteran goalkeeper denied Felipe his kick at the can from the right side of the box but was unable to do the same in the 42nd minute.

The Brazilian midfielder worked a give-and-go with Davy Arnaud, sending the Impact captain the ball wide and bee-lining it to the net for his return delivery. Arnaud’s precise relay found its recipient in the centre of the box and Felipe rolled it into the left side of the net, his third of the season and second in two games.

Slow on the uptake, Montreal began the second half as it had the first — tentatively and with little cohesion — getting its first opportunity in the 54th minute when Justin Mapp sent a Felipe pass over the bar.

In the 63rd minute, Impact coach Jesse Marsch took off midfielder Patrice Bernier, the most recent MLS Player of the Week on the strength of his three-assist performance against Seattle on Saturday, sent on Justin Braun and began playing a 4-4-2 formation rather than the 4-2-3-1 that began the game. Ten minutes later, Marsch substituted Sanna Nyassi for Wenger.

In the 77th, his opposite number replaced diminutive midfielder Paolo Cardozo with veteran forward Juan Pablo Angel. A minute later Fraser pulled Cesar Romero in favor of Jorge Villafana. Less than five minutes later the fresh-legged Goats connected to prove their coach had made the right moves. Villafana crossed the ball to the Colombian forward and Angel, slipping unnoticed behind Brovsky, headed it past Ricketts and into the bottom left side of the goal.

The Chivas goal incited a small celebratory cloud to form around Kennedy’s patch of pitch, courtesy of the supporters’ group section, but Montreal was unable to make the most of the temporary obstruction, its only potential chance smothered by a charging Kennedy emerging from the haze to wrap up the ball.

Montreal’s final chance came in extra time, a 25-metre free kick taken by Felipe and drilled inches over the woodwork. The Impact’s next game is on Saturday evening, when the team hosts the Houston Dynamo.

• Impact players Shavar Thomas, Justin Braun and Zarek Valentin all wore Chivas colours in the past, as did head coach, Jesse Marsch, who ended his 14-year MLS playing career with the Goats, captaining he side in 208 and 2009. James Riley was chosen by Montreal in the MLS Expansion Draft and traded to Chivas for Braun.

• Chivas defender Ante Jazic, a native of Halifax, N.S., is the only Canadian on the California side’s roster. The 36-year-old backliner has 32 international caps for Canada.