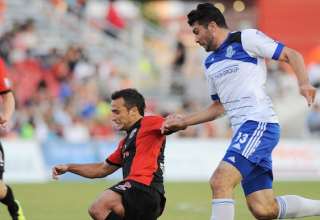 Down a man for more than an hour in the Texas heat. Playing its ninth match in just a hair over four weeks. Still recovering from the emotional shock of Wednesday’s ouster from the Voyageurs Cup thanks to a last-gasp controversial penalty awarded to the Montreal Impact. But the Eddies held on for a 0-0 draw in San Antonio.

The tie means that the Eddies fall to 10 points behind first-place Minnesota and are now mathematically eliminated from the spring season title race. But every FCE supporter had accepted that the Eddies weren’t going to win the spring season weeks ago. The goal is for the Eddies to try and collect as many points as they can — remember that four teams make the NASL championship rounds, and seeds three and four will be awarded to the teams with the best overall records in the league who weren’t spring or fall season champs. So, every point that can be picked up in the spring is important.

And, ironically, all five points the Eddies have earned this season have come on there road.

“My goodness me, the character of the guys was fantastic,” said FCE coach Colin Miller. “I am so proud of them. To lose the way we did Wednesday in Montreal, to be absolutely robbed, and then to come back and play and show this kind of character.”
For the Eddies, the game broke a streak of six games — league and cup — in which they’d scored a goal. But, after Mallan Roberts was sent off in the 27th minute for a high boot to the face of Scorpion Stephen DeRoux, the Eddies’ certainly had to think about hanging on rather than going for it.

Miller said he had no issue with the call. As soon as the crowd roared when DeRoux went to the grass, he knew that Roberts was going to get his walking papers. Roberts was the Eddies fingered for the controversial 96th-minute hand ball call on Wednesday that allowed the Impact to snatch victory from the jaws of defeat.

And if there was one moment that summed up the game, it came in the 90th minute. After being whistled for a foul on FCE defender Kareem Moses, Scorpion striker Eric Hassli punched the ball down the field in disgust.

Yes, the Scorpions had the majority of the possession in the second half. But two FCE players may have had their best games ever for the club. Moses, who came into the line as a replacement for Roberts, was physical and good in the air. He won challenges. He showed us glimpses of that potential that coach Colin Miller saw in him during those scouting trips in Trinidad and Tobago. And Albert Watson, already regarded as one of the league’s top centre backs, made several interventions that stole goal-scoring chances away from the Scorpions. He slid to take a pass of the boot of Scorpion striker Tomasz Zahorski. He won battle after battle against Hassli. The former MLS designated player’s temper boiled as, time and time again, Watson beat him to 50-50 balls and blocked any efforts towards goal.

“He is a natural captain, a natural leader,” said Miller. “He was the glue that held us together. But I think it’s kind of a shame to pick one player out tonight. I thought they were all fantastic, put in great efforts tonight. As we’re driving to the stadium, it’s 85 to 90 degrees out. The guys have really earned a few days off when we get back to Edmonton.”

San Antonio didn’t create a chance of note in the first half after Roberts got sent off. There were some very good looks at goal in the second half, but for the most part Watson, Moses and co. were able to scuttle most of the efforts.

Zahorski had the best two chances of the game; in one instance he trapped a cross, turned and shot. On another occasion, he had a clear header at goal off a perfect cross from Danny Barrera. But, on both occasions, he put his efforts right at FCE keeper John Smits.

For British Columbia native Alen Marcina, the coach of the Scorpions, his team now trails Minnesota by five points, with three matches left on the spring schedule for each team. It would take something miraculous for the Scorpions to leapfrog the teams between it and Minnesota and then overtake the Loons.

Not only did FCE win a moral victory on Saturday, the Eddies also sabotaged the Scorpions’ spring campaign.