September 28, 2021
9 New Articles
Home MLS Montreal Impact The Issey Nakajima-Farran trade: The kind of transaction MLS needs to avoid if it wants to be a world-class league 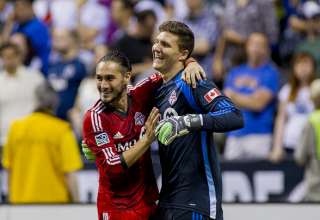 Issey Nakajima-Farran celebrated a Voyageurs' Cup win with keeper Joe Bendik. On Friday, he found out he was traded. PHOTO: BOB FRID/CANADA SOCCER

It wasn’t a trade that would go down as one of the biggest transactions in MLS history, in terms of on-the-field pieces.

On Friday, Toronto FC sent Canadian national team veteran Issey Nakajima-Farran to the Montreal Impact for Collen Warner. Some allocation money was involved. Outside of the fact the Nakajima-Farran has been in and out of the national side of late, the news wouldn’t be making anyone imagine new glories for the two football clubs involved.

But, in terms of how MLS is seen, and how it wants to be seen, this is a prime example of how the league must change if it truly wants to be one of the world’s best by 2020.
Nakajima-Farran, a player who has spent most of his career abroad, came to Toronto FC just after the start of the current season. He scored some goals. He was still in the process of getting settled and, less than two months after first donning the TFC shirt, he was told he was getting traded.

Sure, no big deal, right? Trades happen all the time. It could happen to an NHLer or an NBA rookie or a baseball veteran.

But, that’s the issue. If MLS wants to attract talent from abroad to boost the league, it must eventually understand that strictly following North American practises — such as trading a player just a few weeks after he’s been offered a contract — don’t sit well in the global soccer marketplace. MLS must compete for talent with leagues that regularly pay for their players’ accommodations and transportation, and who guarantee a player will be settled for the length of his contract. If a player is to be sold, his agent is consulted. There are no surprises like showing up for training to find out you need to relocate to another city — and can you make the next flight?

Nakajima-Farran took to Twitter right after the trade and put the hashtag #inhumane right next to MLS. He told his followers that he has to leave Toronto, even before his stuff arrives from Spain.

And the consequence? Agents talk to agents. Instead of “new bold MLS” or “new TFC under Tim Leiweke” they say “same old MLS” and “same old TFC.” And, when the next client looks to make a move, the agent isn’t so sure if MLS is the best place to be.

MLS used to be able to get away with these kind of transactions because the league used to be the only game in town in terms of North American soccer. But, as we found out in our survey of player agents (in the first issue of Plastic Pitch magazine), more and more of them are telling their clients to look to NASL, where negotiations are easier and some of the teams actually offer better terms and money than MLS sides (We’re looking at you, New York, Minnesota and Tampa Bay). As the time comes for the MLS Players Union and the MLS to negotiate a new Collective Bargaining Agreement, the Nakajima-Farran deal is the kind of trade that builds walls between the sides.

Agents already told us that, because you have to deal with MLS headquarters and the individual teams — each playing off each other — that negotiations are more complicated than with other leagues. Allocation money frustrates agents, as they really have no idea what teams have in their budgets to spend on their clients. And, the lack of security for their clients — even compared to NASL — is a problem. But the real issue is that leagues even in Scandinavia or Asia or tiny Eastern European countries will find ways to make their players feel welcome, whether it’s cars or apartments or ways to help deal with local taxes. MLS has to look at this way: How do we compete with that and still keep salaries in control?
The way to do it is to treat players like they’re wanted. That there is a loyalty between club and player, especially one that comes over from another league to give MLS a shot.

At some point, MLS commissioner Don Garber is going to need to sit down and look at the key differences that setM LS apart from the world’s best leagues. And the ugly words “players’ rights” will come back again and again. Outside of Designated Players, the salary cap already restricts what players make — so how attractive will MLS be to international agents if it continues to shuffle players around the deck?

Yes, pro sports is a cruel business. Players understand that they can be here today, gone tomorrow. Kids are always pushing to take your job. An injury can ruin your career in an instant. But, what makes certain teams and leagues rise above others (other than money, and we know MLS isn’t going to be outbidding the Premiership for talent anytime soon) is that they treat their players like, well, humans — not commodities to be traded.