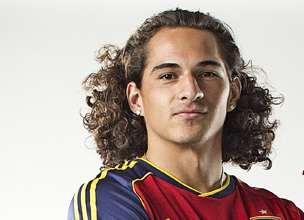 The Vancouver Whitecaps push for a playoff position took a major blow on Saturday, as the home side fell 1-0 to a second-string Real Salt Lake side in front of 21,000 at BC Place.

Devon Sandoval didn’t take long to fire the visitors into the ascendancy, bursting past Whitecaps captain Jay DeMerit to finish a cross from the right sent in by Lovel Palmer.

Goalkeeper David Ousted appeared to hesitate for a split second as the ball came into the area, and following the game suggested he should have done better on the play.

“I think I should have come across and tried to take the ball in the air,” Ousted told reporters following the match. “Maybe I get there, maybe I don’t, but at least try and take the header away from him. I’m not happy with that goal and I’m not happy with my own performance on that goal.”

Ousted described the game as a missed chance to catch up to other teams battling for the MLS Cup playoffs, as Salt Lake arrived in Vancouver with a much-weakened lineup featuring 10 changes from last weekend’s starting lineup, as RSL prepares for Tuesday’s U.S. Open Cup final against D.C. United at Rio Tinto Stadium.

“I think we had a great opportunity today, at home, to beat a team that had maybe their mind elsewhere,” Ousted said. “I can’t explain why we’re not there and not taking an opportunity like this, but we need to get back and try to win the next three or four games, and see if we can fight our way in there.”

As for whether RSL coach Jason Kreis’s decision to play a weakened lineup played into the players’ collective psyche, midfielder Nigel Reo-Coker didn’t try to butter things up and didn’t provide any excuses.

“I have no idea what happened,” Reo-Coker said. “No explanation. I’m not going to make up no lies, no nothing. Today, we got taught a lesson. They were the better team than us. They’ve got a system they play. We struggled with their system.

“They’ve played that system throughout the entire season regardless of who they played against, and they know how to play that system.”

Whitecaps head coach Martin Rennie made two changes to his starting lineup which claimed a 3-0 victory over the Montreal Impact last weekend at Stade Saputo, recalling Russell Teibert in place of Matt Watson, and selecting Camilo to replace injured Designated Player Kenny Miller, who is struggling with a right abductor issue.

Following the match, the Scotsman was unusually frank about his team’s lack of fight and ability to put together any sort of consistent attacking threat.

Reo-Coker had perhaps Vancouver’s best goal-scoring opportunity of the match in the 14th minute, as Camilo ran from his own half and beat two RSL markers before sending the midfielder in on a breakaway. The Englishman didn’t have the best of touches, however, and RSL keeper Jeff Attinella, who was strong all night, stepped in to prevent the chance.

“It was a difficult one,” Reo-Coker said. “Just a bit of a heavy touch. It was as simple as that.”

With this result, the Whitecaps fall to 11-11-8 and remain four points back of the fifth and final playoff position in the Western Conference. The club is back in action next weekend against the Portland Timbers on Sunday at BC Place.