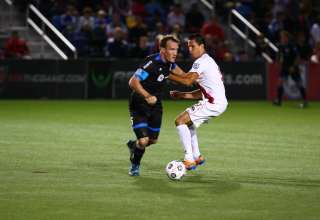 FC Edmonton had the man advantage for more than 50 minutes, but couldn’t score.

That allowed Pedro Mendes’s 15th-minute penalty-kick effort to stand as the difference as the host Atlanta Silverbacks beat the Eddies 1-0 in Georgia.

There were two major storylines that emerged from the match.

The first: That FC Edmonton wasn’t able to do much to trouble Silverbacks’ keeper Eric Ati, even though the Eddies had a man advantage for more than half the game. Yes, injuries to the likes of attackers Michael Cox, Shaun Saiko, Massimo Mirabelli and Gagan Dosanjh, plus the lack of Lance Laing’s free kick and deep runs from the left back spot, hurt the Eddies. But with a team that still boasted the likes of Corey Hertzog and Daryl Fordyce in the attack, with Neil Hlavaty, Wes Knight and Chris Nurse starting in the midfield, there still should have been plenty of opportunities to take advantage of the Silverbacks.

But the Eddies had two chances of note. In the 50th minute, after a cross from Hlavaty was tapped to the top of the box, Fordyce blasted wide. And, with 10 minutes left, Ati was forced to dive to smother a shot from Corey Hertzog that came from the left side of the box.

But coach Colin Miller wasn’t going to allow the injuries to be an excuse.

“We brought down a starting 11 that had a very good chance of winning this game.”

The second: That NASL commissioner Bill Peterson has an unfortunate problem on his hands. And that’s what to do with Silverbacks midfielder Danny Barrera, who is earning (or has earned) the reputation as the league’s dirtiest player.

Barrera picked up his third straight red card of the season… since mid-June. And, heck the NASL took most of July off. This time, he got his walking papers for leaving his foot in and stamping on FCE defender David Proctor, who was in a defenceless position.

The last time the Eddies were in Atlanta, during the spring season, Barrera escaped supplementary discipline from the league after his late shot to the head of FCE defender Albert Watson went un-carded by the match ref. The challenge resulted in Watson losing several of his teeth, and the captain needed dental surgery after the game.

He’s a serial offender. He has a history of serious violent conduct over a very short period of time.

After the game, Miller decided the best thing to say about Barrera was not say anything at all.

“What happens to Danny Barrera will be up to the league to decide.”

And, while Peterson has said the league isn’t quite ready to take its disciplinary process into the public eye, there will be some serious questions again this week. In no league in the world would a player who racked up his third straight red in the same season get a game and a small fine. He’d be looking at a long stay on the sidelines.

Back to the match itself. The Silverbacks grabbed the lead after Antonio Rago, filling in at left back for the concussed Laing, clipped the heels of Pablo Cruz in the box. Mendes buried the penalty kick.

Barrera had a chance to double the lead before he was sent off, but FCE keeper Lance Parker stopped his free-kick attempt.

And, despite having the extra man, the Silverbacks had the best chance of the second half. Speedster Horace James looked like he might be able to get behind the backline and go in alone on Parker, but right back Edson Edward sprinted back and got into shoulder-to-shoulder position. Edward, who missed the last couple of games with injury, did enough to throw James off and the ball eventually rolled harmlessly to Parker.

Miler said the game was a bit of a reversal of the last time the teams met in Atlanta, a game that finished 1-1 but FCE had plenty of chances to win late. Chris Nurse got two yellow cards, was sent off, and Atlanta had the man advantage. But, FCE improved when it went down to 10 men, and got the equalizer.

“The last time we were here, they went down to 10 and they couldn’t create anything. Tonight, we had 11, we were up a man, and struggled to create anything. It’s not because we weren’t trying. By the end of the game, we had five centre forwards on the field. And, when Edem Mortotsi came in for Chris Nurse, I thought he did some good things, passed the ball well and that lad certainly had a bright future for us. But we gave the ball away too easily when we were in possession tonight, again. And we couldn’t create much in the final third.

“It will be something we’ll need to address before next season, that we’ll have to bring in some attacking players.”

Miller admitted that he was very disappointed with the team’s performance, and he expects better when the Carolina RailHawks visit Clarke Stadium on Sunday.

“We owe it to the organization, we owe it to our fans to be better on next week.”