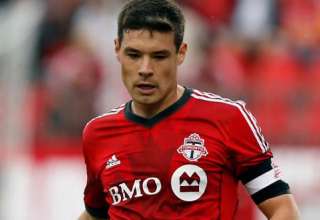 Toronto FC’s new additions couldn’t prevent an old result. Steven Caldwell, Jeremy Brockie and Bobby Convey were hardly the culprits behind TFC’s 1-0 loss to the Columbus Crew on Saturday (Brockie and Convey were second-half substitutes) and yet the result seemed almost like a foregone conclusion given the Reds’ history of in-season roster shakeups and sacrificing valuable points in the name of giving a new lineup time to gel.

With just one win and seven overall points from their first 11 matches, the hope is that this latest amalgamation of talent can finally get the team on track in the short term, and more changes are still to come.

“We knew the level of the job we had ahead of us.. The quality sides in this league are constructed over a period of time. We’re still at the early stages,” said TFC assistant head coach Fran O’Leary, addressing the media since head coach Ryan Nelsen had lost his voice. “I know there’s no panic in our dressing room, in our group. We’re going to construct this team over a period of time, over several [transfer] windows.”

With the three newcomers arriving within the last 11 days, Toronto’s lineup had just one change from their previous match on May 8. Caldwell stepped in at centre back though his partner in the middle was Doneil Henry rather than Darren O’Dea. The team captain moved from his regular CB spot to left back to help cover TFC’s injury problems on the flank.

“It’s quite obvious the team needs improving,” O’Dea said about the position switch. “If you’re winning games week in and week out then you can complain. If you’re losing games, you can’t do anything about it.”

It could’ve been one move too much for TFC, as Crew midfielder Dominic Oduro took a pass from Federico Higuain in the 42nd minute and got between Caldwell and Henry while streaking down the field. Oduro fired the ball past Joe Bendik to account for the match’s only goal.

It was a well-deserved assist for Higuain, who was twice unlucky in the first half after blasting shots off the crossbar and the right post.

The Reds, led by striker Robert Earnshaw, weren’t without their own chances. Earnshaw did his best at turning some shaky service into legitimate opportunities, particularly a 22nd minute attempt that saw Earnshaw evade three Crew defenders and nearly sneak the ball inside the left post.

Earnshaw was also the point man for the Reds’ best chance of the game. He sent a cross from the left side to fellow striker Luis Silva, who drew two defenders and headed the ball right to a wide-open Justin Braun in front of the net. Braun touched the ball when he should’ve shot it, however, and his tapped attempt went wide.

Finishing the job, in general, was a theme of O’Dea’s post-game comments. Despite TFC’s record, the captain believes his side is “a match for any team in the league” but its efforts in staying close in games aren’t enough.

“We need to get together and believe in ourselves. We’re competing every week, which is the bare minimum you can ask for any football team, now it’s time to step up because we’re obviously not getting any results,” O’Dea said.

Caldwell was pleased to get a full 90 minutes under his belt. His last game action came on March 16 as a member of Birmingham City FC and the defender hadn’t played a full match since Feb. 23. Aside from a drier pitch than he’s used to in England, Caldwell said he had little trouble acclimating himself to Major League Soccer.

“The pace is just the exact same. There’s no real breaks in the play or in the tempo of the match which is different from back home,” Caldwell said. “But it’s just a bit of adjusting and I’m pleased I’ve gotten through my first week and played my first game. I’m bitterly disappointed in the result but glad to have felt what it’s like. I’m sure I can improve next week.”

Braun was substituted out for Convey at halftime as O’Leary said that Braun had re-aggravated an existing injury. Brockie came on for Reggie Lambe in the 64th minute so, for about a half-hour, TFC got to look at all three new arrivals at the same time.

It’s hard to say exactly what the Reds’ Starting XI will look like in even a few weeks time, given the uncertainty surrounding Tal Ben Haim’s loan deal and the return of regulars Richard Eckersley and Danny Koevermans from injury. O’Leary said that Koevermans was probably two or three weeks away from returning to action, and the striker played 45 minutes in a reserve league match on Saturday.

The loss drops TFC’s all-time record against Columbus to 1-9-7 in the laughably one-sided Trillium Cup derby. The Crew return to BMO Field on July 27, giving the Reds another chance to finally pick up their first victory on their home pitch over their Ohio rivals.