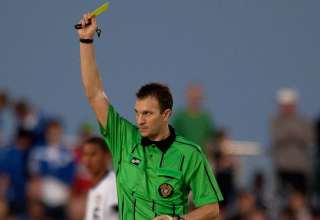 The Vancouver Whitecaps conceded late to Jose Valencia in controversial circumstances on Saturday, as they drew 2-2 with the 10-man Portland Timbers in front of 19,823 at BC Place.

On the game-tying play, in the 84th minute, the substitute appeared to bring a long ball from Will Johnson down with his hands – match officials were asked by a pool reporter what they saw on the play, and responded that from their view Valencia brought the ball down with his chest.

“I thought it was a hand ball,” Rennie remarked when asked about Valencia’s equalizing goal, before later addressing Portland’s red card, in which Futty Danso collided with Camilo as last man back. “Whether it was a red card or not – I don’t necessarily think it was – both players were running together so that was a little harsh.

“Sometimes when a team goes down a man, it doesn’t necessarily help you.”

Rennie also wasn’t thrilled with the decision by referee Matthew Foerster to award a penalty which Will Johnson scored from in the 52nd minute after Andy O’Brien handled in the area.

“In the second half, I was disappointed with the decision for a penalty,” Rennie said. “Because Andy’s hand is by his side and there’s not a lot he can do. The same thing happened in the first half on Futty Danso, and no foul or infringement was given, so I thought that was a bit harsh.”

The Whitecaps were leading 2-1 after the red card through a first-half free kick goal from Camilo and an excellent strike from Gershon Koffie in the 54th minute, as just three minutes after Danso’s dismissal Will Johnson hit a ball in Valencia’s direction, which the substitute brought down well before beating O’Brien and slotting home.

After the match, Brad Rusin, who last his aerial duel with Valencia on the play, held up his hand as the man at fault, hand ball or not.

“I take full responsibility for the second goal,” Rusin told reporters. “At the end of the day, I have to be better and we can’t blame the referees.”

This result means the Whitecaps remain winless against Cascadia rivals Portland Timbers and the Seattle Sounders in the Major League Soccer era.

“We feel that’s two points lost for us,” keeper Brad Knighton said. “We need to win that game – we’re a man up and one long ball right down the middle of the field beats us. We can’t let the referee make a decision for us.

“We need to take care of business – it’s unfortunate – I thought we played really well today.”

Rennie tinkered with his lineup for this match in a number of ways. Knighton made his first league start of the season, with regular starting ‘keeper Joe Cannon dropped, and Camilo played centre forward for the first time this season after primarily playing as a wide attacker.

The Scottish tactician refused to indicate whether his move to Knighton would be a permanent switch, and said the ‘keeper’s kicking ability was the reason for the change.

After a congested schedule, the ‘Caps, now 3-4-4, get a bit of a reprieve with a 10-day break before their next match, which happens to be the second leg of the Canadian Championship final against the Montreal Impact on May 29. The sides are level at 0-0 on aggregate after the first leg in Montreal.

“It’ll help us,” Rennie said of the break. “We haven’t been able to train a lot for the last number of weeks. It’s just been one game after another… being at home is an important factor, and also the fact we don’t play the Saturday before that game.

“Montreal will have to play and then travel – it’s a long way, and it’s hard – and that’s the one thing I felt disappointed about tonight. The players really deserved a win out of that. They put in a fantastic effort this week. It’s been incredible to see and I think they deserved a little bit more.”