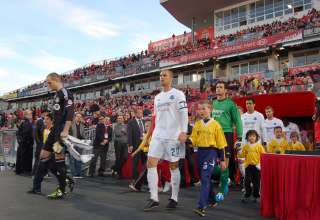 With a three-goal gap separating Toronto FC and FC Edmonton going into the second leg of their Nutrilite Canadian Championship tie, there wasn’t much drama as to who was advancing to the tournament final. Wednesday’s match therefore became a test for both sides to exorcise some recent demons and, to that end, both teams were happy with their performance in the 1-0 TFC victory.

For FCE, the game presented an opportunity to turn around its terrible recent form. Edmonton had been outscored 10-0 in their previous three matches, including a 3-0 loss to TFC in the first leg of the tie, and an ugly 5-0 loss to Montreal in league play last Sunday. Though FCE still didn’t get on the scoreboard (stretching their scoreless drought to 439 minutes), they at least threatened the Reds and kept the game close.

“When I look at the game we did pretty well, it was much better organized than on Sunday, especially in the back,” said FCE head coach Harry Sinkgraven. “In the second half we tried to press a bit more since we had the wind advantage. Also in the second half we pressed Toronto a couple of times and it’s unlucky we didn’t score. We looked for a good game from our side and we’re satisfied about it, but we want to have a result.

The first 20 minutes showed little of this attack from Edmonton, as the team got off to a very slow start that belied its desperate situation in the tournament. It was TFC who was clearly the better side, led by the strike force of Joao Plata and Alan Gordon. The two forwards combined on a few scoring chances before finally breaking through in the 21st minute.

Plata, the five-foot-three striker whose speed and diminutive size makes him a challenge to cover, took possession of the ball and brought it to about five yards outside the box. From there he flicked it to Gordon, who was wide open on the right side of the net. Gordon had enough time to position the ball exactly as he liked before firing it past FCE goalkeeper Lance Parker, who supplanted Rein Baart between the posts. The strike was Gordon’s second goal in NCC competition, and his fourth overall for Toronto FC this season.

With the Reds now holding a 4-0 aggregate lead, the tie was all but over. TFC advances to the two-legged championship final and, as the top seed, geta to play the second leg at BMO Field on May 25.

The two wins over Edmonton improves TFC’s record to 5-0-2 over their last seven NCC matches, a streak that began with its improbable “Miracle In Montreal” 6-1 victory over the Impact in 2009 that erased a seemingly insurmountable goals-scored deficit and clinched the Reds the Cup.

Perhaps with an eye towards avoiding any such surprises on Wednesday, TFC coach Aron Winter’s Starting XI was close to his first-choice lineup. It was a sign that Winter was not just taking FCE seriously, but also a reaction to Toronto’s lacklustre 3-0 loss to Seattle on the weekend.

“To compare the game from tonight and Saturday, now we’re more of a group,” Winter said. “Against Seattle we were afraid to play soccer. Today it was different.”

Whether it be in league play or in the NCC, Winter said that his team needs to approach every match as important given the fact that the Reds are still learning to play with each other and learn Winter’s system.

“It doesn’t matter if you’re playing a team from MLS or a team from the (NASL),” Winter said. “The most important thing is if you don’t underestimate the opponent. As I told them, they have nothing to lose. You have to play like a normal game.

“[League play and the NCC] are both important for me. I’m a coach that wants to win every game, and it doesn’t matter which.”

Sinkgraven also saw the game as a learning experience. It was FCE’s first game at BMO Field in its first year of competition in the Nutrilite tournament, and the coach felt even being on the pitch helped his young players.

“If you play games like this when the speed of the game is higher and the spaces are smaller, then of course you’ll develop,” Sinkgraven said. “Also, [playing] in a big stadium, a lot of people, a big crowd, it does something with the brains of the players. I think for their development, it’s very well that you play those games.”

“We are not as good [as TFC] now, but we have a lot of young players….If you look at the players from a technical side, it’s good. But on a tactical side, we can develop a lot with the younger players.”

FC Edmonton will continue on the road in Atlanta on Saturday, while Toronto returns to league action when the Houston Dynamo comes to BMO Field on Saturday.

Two players whose status for that game may be up in the air are Gordon and Julian de Guzman. Both men required substitutions on Wednesday after suffering apparent leg injuries. Gordon seemed to pick up a knock while fighting for the ball in the 65th minute, while de Guzman jumped to attempt a header in the 72nd minute and came down awkwardly. De Guzman’s injury was of particular concern given the midfielder’s offseason knee surgery, but he left the pitch under his own power.

After the game, Winter said both players would receive further evaluation, though he noted that their removal was partially a quick reaction to his regulars receiving any sort of injury.

Losing either player would be a blow to the Reds, particularly given the fixture congestion that awaits them over the next few weeks. Wednesday’s game was Toronto’s fourth in the last 12 days, and beginning against Houston on Saturday, they embark on a stretch of seven matches in just 22 days.

Two of those games represent the NCC final, but while the national championship may represent an added burden for the Reds over this hectic month, they welcome the opportunity of winning the title for the third consecutive year.

“It’s just continuing to develop, the younger guys coming in, playing together, producing, getting to gel. I think moving forward that’s crucial, especially in these games,” said defender Adrian Cann. “We need to keep the [Canadian Cup] history alive.”