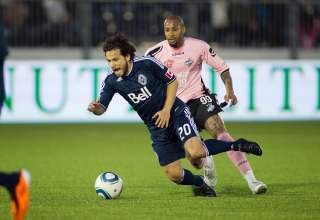 Make no mistake. The Vancouver Whitecaps dominated the second leg of their Nutrilite Canadian Championship semifinal in front of their home crowd at Empire Field. If not for the stellar work of Impact keeper Bill Gaudette, the tie would have decided over a long time ago.

But, the Montreal Impact should be the one going through. All Gerba had to do was convert what was a pretty automatic scoring chance in the dying seconds of extra time. But, with Whitecaps keeper Jay Nolly at his mercy and no defender in sight, Gerba’s header crashed off the post. The Whitecaps escaped with a 2-1 aggregate win; a 1-1 draw on the night.

Wearing the club’s special pink jersey that the Impact dons for NCC matches, Gerba’s miss looked anything but pretty.

Had Gerba not missed — and make it clear, when the chance is that wide open, hitting the post is a miss, not a case of bad luck — Montreal would have won the series because it would have scored a second road goal.

Vancouver had taken the 2-1 aggregate lead in the second half of extra time after Mouloud Akloul moved up from his defensive position to slam home the rebound after Gaudette made a fantastic save on a free kick from Terry Dunfield.

For the Whitecaps, who led 1-0 going into the second leg, it looked as if the Akloul goal would be the let-off moment. But, in the final seconds of the game, the entire Whitecaps backline shut off. A hopeful cross was punched into the Whitecaps box, and Gerba was left completely unmarked. He was at point blank range. And he pushed his header across Nolly, towards the far post, and right off of it.

Gerba went from hero to goat; it was his 83rd minute penalty that tied the game on aggregate. Montreal got the equalizer thanks to a call that will surely be debated on message boards for the next day or so. Gerba looked to go down as soon as he felt Alain Rochat touch his back when a hopeful, lofted cross was sent into the Whitecaps penalty area.

Gerba’s converted penalty marked the first shot the Impact got on goal in the game.

Gerba could have won it in the 89th minute for the NASL side. Whitecaps’ defender Greg Janicki was too nonchalant as he tracked back to retrieve a ball in his own end after the Impact cleared its lines after a period of Vancouver pressure. Gerba was able to get around Janicki, get to the ball and got off a point-blank shot that Nolly did well to get his foot to.

Janicki, who struggled at times, escaped blushes in extra time after he miskicked an attempt to clear a cross from Philippe Billy; the ball crashed off the post.

But, had Gerba converted his last-gasp chance, the man of the match award would have gone to Gaudette. The Montreal keeper is making a strong case to move with the club to MLS next season. Gaudette made two saves in extra time on Dunfield, one on a half volley and another on a low drive from well inside the box after Nazir Khalfan held the ball up nicely and then teed it up for his ‘Caps teammate to shoot.

He did well to challenge Russell Teibert on two great second-half chances to score, coming out bravely in both instances to cut down the angles, and forcing Teibert into shooting wide each time.

The Whitecaps face Toronto FC in an all-MLS final that kicks off May 18 in Vancouver, as the lower seed hosts the first of the two legs. The Whitecaps hammered Toronto FC 4-2 in their MLS opener, but haven’t beaten MLS opposition since that game.

And, of course, an MLS winner is guaranteed. The winner of the Voyageurs’ Cup will play the first leg of a CONCACAF Champions League qualifier in the July 26-28 window, putting it in conflict with the MLS All-Star Game that goes July 27 at Red Bull Arena.