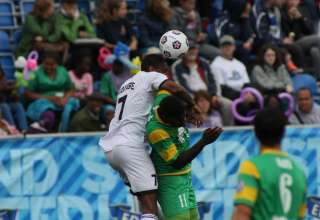 There is no goalkeeping controversy at FC Edmonton.

After John Smits put in a man-of-the-match performance Sunday, allowing 10-man FC Edmonton to escape its home date against the Tampa Bay Rowdies with a 0-0 draw, coach Colin Miller that Lance Parker is in no danger of losing his No. 1 job.

“I thought that Smits did fine, but Lance Parker is still our number one,” Miller said after the match, which leaves Edmonton four points off the first-place Atlanta Silverbacks in the NASL spring-season race.

Smits came in last week after Parker got red carded, and he made a penalty save and a point-blank stop before being beaten on Fort Lauderdale’s second chance from the spot. On Sunday, with Parker suspended, Smits was the game’s highlight reel, with several excellent stops.

Like a humble hockey goalie, Smits gave his credit to his team.

“I thought they did an excellent job,” said Smits, “The work ethic was definitely there.”

Miller was frustrated that young central defender Mallan Roberts picked up a second yellow early in the second half for a late aerial challenge on the Rowdies’ Keith Savage.

Roberts was on the Rowdies side of half, 60 yards from his own goal when he went in late on Savage. And the foul came just a minute or two after he was singled out for a hard foul in his own area. And, like so many two-yellow situations, you look not only at the second infraction, but the first. Roberts’ first yellow came in the Tampa Bay area, when he was whistled for fouling Rowdie Takuya Yamada on a set piece. Two fouls that came far, far away from his own goal, and the young defender was off.

Roberts was playing in place of injured regular Carlyle Mitchell.

“We know we can compete with anyone in the league, but we have to keep 11 players on the park,” said Miller. “Tampa Bay is a very good side, well organized. But we have the best defensive record in the league. We just need to play with 11 men.”

And, with the man advantage, Tampa was able to keep the ball and not suffer the effects of playing last Wednesday in the U.S. Open Cup.

Crews worked to clear the turf at Clarke Stadium, as torrential downpours had left standing water on the pitch an hour before kickoff. Though the rains let off at kickoff, the pitch was still slick.

Tampa kept a compact back line, limiting the influence of FCE’s striker Michael Cox. Though no Rowdie defender is as big as Cox, they worked as a committee, surrounding the striker and not allowing him space. He was really only able to create one chance in the first half, winning a ball in front of Yamada and then spreading the ball to the left side of the area, where Shaun Saiko’s one time chance was parried away by Tampa keeper Diego Restrepo.

Tampa, though, had two great chances before half. Canadian defender Andres Arango’s shot from the top of the box was deflected by FCE’s Chris Nurse, forcing Smits into a diving reaction stop. Then, on a corner, Georgi Hristov turned the ball towards goal, forcing Smits to fall to his knees, butterfly style, to stop the shot on the line.

Smits’ magic continued into the second half. Off a free kick, Luke Mulholland laid the ball off to Shane Hill at the top of the box. His low shot was labelled for just inside the left post, but Smits dove and got his palm to the ball. Rowdie Jordan Gafa got to the rebound, but was in an offside position.