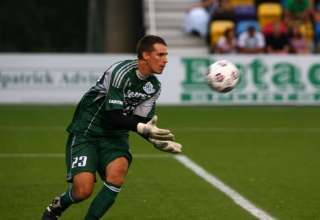 Last season, John Smits was playing goal for the University of Toronto. On Saturday, Smits recorded a clean sheet in his first NASL start as a tired FC Edmonton squad defeated the 10-man Atlanta Silverbacks 2-0.

The Eddies, playing their third match in six days, spent most of the second half up a man, but had to endure protect a 1-0 lead, as tired legs set in. But, thanks to some desperate defending and safe hands from Smits in goal, the Silverbacks couldn’t send their fans home happy. A late insurance goal from Ilja Van Leerdam, set up by a headed pass from substitute Paul Craig, made the scoreline seem a tad unfair to the home side, who was in the match for most of the game.

Smits, starting in place of David Monsalve, had a couple of key second-half moments while Edmonton was up by a goal. He made a low, diving stop after Brazilian defender, Rilla, rose up and beat the Eddies’ defenders to a corner. And he came out to successfully challenge Honduran national-team veteran Danilo Turcios, who had got past the Eddies back line.

“Before the game, I knew this was a chance to make a statement to North America that CIS can produce a lot of great players, and we’re often overlooked,” said Smits. “It was a very emotional game for me. There needs to be some kind of draft system for us in North America.”

The Eddies’ opening goal was created through combination play between Dutch veteran Van Leerdam, who was a surprise non-starter in Wednesday’s Amway Canadian Championship, and Michael Cox, who impressed against the Whitecaps and kept his starting position.

Cox took the pass from Van Leerdam and scored to give FCE the lead just 13 minutes in.

“Ilja touched the ball through to me, and I was able to touch it past the defender, and get it past the keeper who was sliding out,” said Cox. “It really helped my confidence a lot and it helped get the team an important win on the road.”

Edmonton dominated play and possession in the first half, as Atlanta looked content to simply play long balls down the middle. We learned that Daniel Illyes, the Silverbacks’ Hungarian keeper, has the biggest, longest goal kicks in NASL. We also learned that those long bombs often lead to him outkicking his forwards and simply giving the ball back to the Eddies.

The Silverbacks, who were winless on the season coming into the game but had drawn all but one of their matches, were so out of sync in the first half, they actually went offside when they had a five-on-three break on the Eddies after FCE players got trapped in the Atlanta end off a corner.

But, Atlanta came out brightly in the second half. Less than a minute in, defender Martyn Lancaster flashed a shot just over the bar, but the replay showed Smits might have just got his fingertips to it, as well.

And, after Smits denied the Rilla and Turcios chances, Silverbacks defender Shane Moroney was sent off for a late tackle from behind that saw him chop down Eddies’ forward Matt Lam. What was silly about the challenge was where it was on the field: Lam was taking a pass in the Eddies’ half of the park as he faced his own goal. In that case, Moroney was better off not making a challenge at all. Lam was not going to do anything threatening with the ball.

“Making a couple of big saves really pumped up our team,” said Smits, who was told on Friday by coach Harry Sinkgraven that he was going to get the start. “We knew that they’d get a pep talk from their coach at halftime and would come out strong in front of their own fans… But, as far as their pressure, I felt we dealt with it well. And then they got the red card.”

The Silverbacks still dominated possession after they went down to 10 men. But the Eddies defended deep and, despite some frantic moments, Smits got the clean sheet.

“We were all very banged-up and bruised,” said Smits. “We didn’t even get a chance to work on fitness after the Vancouver game (Wednesday). Even yesterday we were in a recovery session.”

And, more importantly for the Eddies, their second NASL win in a row — and they’ve scored eight times in their last three league matches after being shut out in the first three.