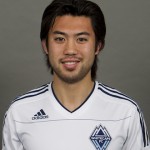 Lee Nguyen in a Whitecaps' jersey

The streak is over, and it’s largely due to a castoff.

After winning five consecutive matches in all competitions, the Vancouver Whitecaps fell to the New England Revolution 4-1 on Saturday, mainly thanks to Lee Nguyen, the twice-capped U.S. international attacking player the club waived following preseason.

Nguyen scored twice and set one up on the night at Gillette Stadium, creating his own version of the cliched tale of a player proving his old coach wrong.

But while the final score heavily favoured the Revs, things didn’t appear scripted for that conclusion in the early moments, as the ‘Caps took a fifth-minute lead through Eric Hassli.

The big Frenchman scored his first Major League Soccer goal outside of the Pacific Time zone to top off a fantastic piece of interplay between Davide Chiumiento and Sebastien Le Toux in the final third, scoring his third goal in four games in all competitions.

“It was an excellent goal,” Rennie said from Foxborough, Mass., following the match. “If you analyze the game there was a lot of positive possession and ball movement and things like that. I think sometimes when you’re a couple of goals behind it’s easy to play and pass the ball. It just wasn’t there for us tonight – maybe it was a slightly harsh 4-1, but that’s what it was.

“Sometimes those scorelines are the ones that help you learn the most because you made a lot of mistakes to make that happen.”

Vancouver’s early lead lasted just about a minute, as Nguyen stepped up to finish a ball the Whitecaps’ defense failed to clear, as he was the first to react to a loose ball in the penalty area.

Following the result, Rennie was critical of his central defensive pairing, suggesting the partnership of Alain Rochat, who normally plays as a fullback, and Carlyle Mitchell, lacked cohesion.

“Playing slightly different players who haven’t played as much together at the MLS level cost us tonight,” Rennie said. “For us, we’ve just come off winning five games in a row. The next few games are really big for us. We’ve got a cup final on Wednesday, which we’re really looking forward to.

“It’s all positive for us except for tonight which was a humbling experience and one that we have to take our medicine, learn from and improve from.”

The Scotsman’s decision to tinker with his lineup came as a result of Vancouver’s upcoming Canadian Championship first leg match against Toronto FC on Wednesday at BC Place. Regular starting centre backs Jay DeMerit and Martin Bonjour were left out of the side with that match in mind.

“With the number of games we’re playing, we know we’re going to be looking to rely on Martin [Bonjour] and Jay at the centre of defence for us over the next four or five games that come in quick succession, so we juggled it a bit tonight,” Rennie told Vancouver radio station TEAM 1410 after the match. “I’d look to do that differently if I was picking the team right now. I don’t think [the centre back pairing] gelled how we wanted it to. I think Carlyle and Alain did well against Edmonton in the first round of the Canadian cup, but they didn’t partner up so well tonight.

“Definitely some things we could have improved on there and a humbling night for us and one we have to learn from.”

The Whitecaps look to bounce back from their first defeat in six matches when they play Toronto FC on Wednesday at BC Place in the first leg of the Canadian Championship final.  The winner of the Canadian tournament receives a berth to the group stages of the CONCACAF Champions League.