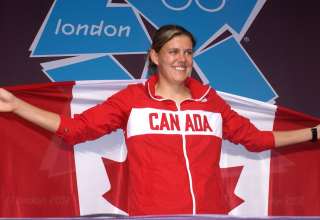 For the players, it was easy to see the occasion was a bit overwhelming. Sinclair, who set an Olympic tournament goalscoring record with six in London, including her hat-trick against the United States in Canada’s 4-3 controversial semi-final defeat was left – for once – without an answer.

The sentiment was shared by fellow B.C. native Sophie Schmidt, who was greeted by chants of “Holy Schmidt!”

“You can’t ask for anything more, to come out and have young girls chant your name and be supportive,” said Schmidt. “It’s fantastic.”

While answering a question from reporters, one young fan’s shout drowned out Sinclair’s answer, as the girl screamed, “Christine Sinclair for prime minister!”

For Sinclair, especially, the last few weeks have been dramatic. On one side, she helped her team to bronze against France in the third-place match, and enjoyed a great individual tournament which led to her appointment as Canada’s flag bearer for the closing ceremonies.

“It was the hugest honour,” Sinclair said. “Walking out, into that stadium, with 80,000 fans, holding the flag up — it was incredible.”

On the other side, she’s faced the adversity that came with Canada’s semifinal defeat to the Americans — a loss that was overshadowed by officiating that was widely condemned following the match.

“It’s the Olympics,” Sinclair said of how she feels about the refereeing in the semi-final now that she’s had some time to reflect. “You’ve lost a chance at the gold medal. Unfortunately, in our sport, refs have input. I think we’re still bitter, but this helps.”

Yes, getting on the podium helped ease the pain for a team clearly devastated by a result they felt was unjust. But when asked about the long-term legacy of the Olympic performance for the women’s game in Canada, Sinclair responded with the sort of answer one would expect from any cult hero.

“I’m hoping that what our soccer team has done for soccer and women’s sports in Canada — that’ll be better than a [gold] medal.”

Sinclair, who will receive $5,000 as part of the government’s Own the Podium program, feels satisfied with the support that she and her teammates received in the buildup to the games under head coach John Herdman.

“I can’t complain,” Sinclair said. “The preparation we had — to live in Vancouver. It’s the best preparation we’ve ever had for a tournament, and it worked.”

Worked indeed. While the semifinal defeat was a blow at the time, and still is clearly irritating on some level for the squad, when the achievement of the squad is kept in context — this women’s soccer team has won Canada’s first medal in a traditional team sport since 1936 —the end result has to be seen as a positive, according to Sinclair.

“We wanted, heading into this tournament, to leave the sport in a better place than what it was when we got into it,” Sinclair said. “I could never have imagined this would happen.”

As for what will happen to the squad now with many players in and around age 30 – it’s not entirely clear, but Sinclair is ready to carry on to have another crack at gold at the 2016 Olympics in Rio, in addition to playing in the Women’s World Cup in 2015, which will be hosted in Canada.

“I’m not retiring,” said Sinclair. “I don’t think any of us are retiring.”