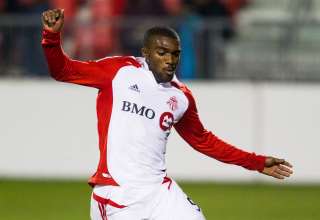 A draw would normally be a welcome result for a team missing five starters, but for Toronto FC, Wednesday’s 2-2 scoreline with the Portland Timbers felt like two missed points for the Reds, especially since TFC once again allowed a goal on a set piece.

A victory would have moved Toronto off the bottom of the league table for the first time all season. The Reds entered the match with 19 points, one behind the Timbers, but TFC couldn’t overcome a slow start and some defensive miscues to close out the win.

The only notable event of a lacklustre opening hour of soccer was Portland’s goal in the 21st minute that came off a corner kick. The corner was deflected in front to striker Sal Zizzo, whose initial attempt was blocked, but he converted the rebound for his first goal in 50 career MLS games.

It was the seventh goal allowed off a corner by TFC this season and the 19th goal allowed in non-open play situations. Defending set pieces has been a problem for the team going back years, and after countless training drills, Toronto head coach Paul Mariner said his side knows what to do and it’s simply a matter of execution on the pitch.

“The number one thing you’ve got to have is that desire inside you that the ball is not going to be won by one of the opposition,” Mariner said. “If it is, you’ve got to react and get that ball out of your box. That’s something we’re having difficulty dealing with.”

The depth pool got even thinner when Reggie Lambe suffered a knee injury just before halftime and was substituted out for Andrew Wiedeman after the break. Mariner said that a preliminary examination revealed a strained right knee ligament for Lambe, but the midfielder himself said the removal was largely precautionary.

“I ran into a tackle and I hit my leg awkwardly. I felt a bit of pain and thought I could play on, but obviously the physio and medical staff know better,” Lambe said. “I think I should be back training on Friday and good to go.”

Mariner gave his team “a few choice words” at halftime and the Reds finally came to life in the 57th minute. Centre back Richard Eckersley put a long ball in that was deflected into the box for Luis Silva, whose chance was stopped but Eric Hassli was there to convert the rebound. It was Hassli’s first goal in his second game for TFC since being dealt from the Vancouver Whitecaps on July 20.

It took only six minutes for the Reds to strike again, with the Hassli/Silva strike force getting the finish off a strong individual effort from Ashtone Morgan. The left back held the ball for several seconds on the left side, first keeping the ball in play, controlling it and then evading his defender long enough to send a cross towards the net. Hassli flicked the ball on to Silva, who put the final touch past goalkeeper Donovan Ricketts.

Toronto had the lead but it couldn’t hold it, as in the 82nd minute, Timbers defender Steven Smith broke free on the left side and passed to a wide-open Darlington Nagbe, who easily headed it through for the equalizer.

Lambe felt the goal was initiated by a poor call from a linesman awarding Portland a throw-in, but that didn’t excuse TFC’s lax play in letting Smith and Nagbe get so much space.

“We have to keep our heads in the game and stay focused to clear the ball, then talk to the ref after,” Lambe said.

Portland extended its winless mark on the road (0-8-3) but their two goals against TFC doubles their number of road goals in their previous 10 away matches.

It remains to be seen how fit the international players will be following their games, but Mariner expects them all to be available for selection when the Reds host Sporting KC on Saturday. First-place SKC will be a much tougher task for Toronto than the struggling Timbers, though Mariner says that all things considered, Wednesday’s draw was a net positive.

“How many teams in MLS can have five starters out and put on a performance like that?” Mariner asked. “When you ask players to come in after months of layoffs… if you factor those things in, with Portland having most of their guns firing and us coming out with 2-2, I’m reasonably happy with what’s going on.”