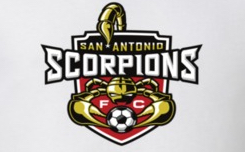 Those hoping to see a Shaun Saiko vs. his old team storyline on Saturday may be disappointed.

Saiko, FC Edmonton’s all-time leading scorer and former poster boy of the franchise, has been out of the San Antonio Scorpions’ lineup with injury, and his status for Saturday’s
match against the Eddies is doubtful.

The Eddies visit San Antonio on Saturday night. The Eddies will have to pick themselves up emotionally after Wednesday’s at-the-death elimination from the Voyageurs’ Cup. And they will need to somehow be ready to deal with the Texas heat even though the Cup/NASL schedule has them playing their ninth match in four weeks.

The Scorpions, coached by Canadian Alen Marcina and featuring Canadian defender Adrian Cann, are three points behind Fort Lauderdale and Minnesota for the NASL spring season lead. The Strikers and Loons play each other this week, so a win for the Scorpions mean they gain on someone. But a loss — or even a draw — will mean that the Scorpions will lose ground to the team that will be at the top of the standings at the end of the weekend.

The 11 asked Saiko if he wanted to talk about the prospect of his new team playing his old club, and he wouldn’t go there. He said “what’s done is done.” All he wanted to discuss was how important this game was to his new team, the Scorpions.

“It’s a massive game for us if we want to have a chance at winning the spring season.”

In the middle of the 2013 season, Saiko was relegated to FC Edmonton’s reserve team, and played out the final couple of months there. It was the most disappointing season of his professional career, and the way in which he was sent to the reserve side divided the supporters. The weekend after he was demoted, Edmonton supporters made a banner in support of the hometown hero, and coach Colin Miller even agreed to meet with FCE fans to discuss the controversial decision to demote Saiko with the purpose of letting his contract run out.

But the Saiko vs. FCE matchup will likely have to wait till August 3, when the Scorpions visit Clarke Stadium.