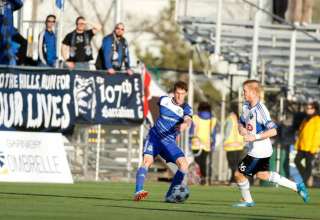 Chances are, if you saw the soccer headline “Cup semifinal: Officials add six minutes, home team awarded game-winning penalty near end of stoppage time,” you’d roll your eyes and think to yourself about the corruption that plagues matches in Central America or Eastern Europe or Asia. Steaua Edmonton vs. Partizan Montreal.

Now, judging by the reaction on Twitter and message boards — FC Edmonton fans are incensed that, well, the six-minutes-plus-penalty story originated in Canada. And the conspiracy theories abound, as is the nature of any fan of any underdog who feels his or her team of choice was done in by a dubious call.

Last night, referee Drew Fischer ruled that FCE defender Mallan Roberts handled the ball in the penalty area off a 96th-minute free kick, even though the defenders hands were held behind his back. Today, FCE picks up the pieces and wonders how what would have been a franchise-defining Amway Canadian Championship semifinal win over the Montreal Impact turned into a 96th-minute nightmare.

To be fair to Fischer, no one should be talking conspiracy. It’s unfair to call refs cheats unless you have a smoking gun. He made a mistake. He’s human. And, as many Impact fans would argue, he may have missed a penalty call a few minutes before the end of the match, when FCE defender Albert Watson and defender Sanna Nyassi got tangled at the edge of the area and contact continued into the area.

In this case, it’s unfair that a referee can’t speak to the media. Because it’s a lot easier for Fischer to hear or talk about the fact he made a mistake than be accused of being corrupt. They are two entirely different things. And Fischer doesn’t determine how much time added on goes on the board, either.

This is much more a case of what happens when part-time referees are assigned to big games. Referees at this level need to be full-time professionals. Same for any major league or competition in the world. In Europe, we shouldn’t hear about top-tier match officials’ day jobs. Nor should that be the case in North America. But, because we don’t invest in officiating like we should… well, we sorta get what we deserve.

So, without Fischer being able to defend himself, we can only speculate on what led to the bizarre series of events from Wednesday. Did the fact that he previously made two major decisions in favour of the Eddies — a penalty kick that gave FCE its second goal and the decision to award a free kick and not a penalty on the Watson/Nyassi incident — weigh on his mind?

In the end, no explanation will console FCE or its supporters. Toronto FC, which beat the Whitecaps on penalties last night — even though the Reds’ opening goal of the second leg looked to be offside (ah, the officiating, again!) — will play the Impact in the final. For FCE, there is missed glory and a missed chance to have to spend tens of thousands more budget dollars on CONCACAF Champions League away matches.

But, for FCE, maybe there’s something in all of this.

Let’s face it: FCE’s attendance hasn’t been wonderful. Capacity at Clarke Stadium, in terms of tickets that were spoken for (not bums in seats) has only been touched once since the facility was expanded. And that was for this year’s home opener to the New York Cosmos, a team name that’s more recognizable to the average sports fan than many MLS franchises.

Many marketing tactics have been tried. In the first season, multilingual billboards and LRTs wrapped in ad signage told us all to Stand United. Broad advertising was replaced by efforts to target Edmonton’s soccer community. The academy was expanded so more local players could wear FCE colours. A women’s program was added. So much outreach, and the increase in the stands has been steady, but slow. And FCE still doesn’t grab media attention in its own market. As the Impact played in Edmonton last week, the city was fixated on junior hockey, with the Oil Kings playing in the WHL final.

So what will connect? Let’s face it, last night’s match was just another chapter in what has to be the strangest first five years any pro soccer team in Canada has endured (and, yes, I was around TFC in its first five years… sorry, not even close to FCE).

There have been thunderstorm-delayed matches. Last year, a visiting coach was escorted out of Clarke Stadium by police. In last year’s Voyageurs’ Cup semifinal at home to Vancouver, the Eddies felt that two of the Whitecaps’ three goals were illegitimate — an offside marker and a penalty off a Camilo dive (Roberts was also the victim, there. The poor kid must feel cursed. And he can’t get his Canadian passport, either.) This year, in NASL road games, twice has striker Frank Jonke been hauled down when he had clear breaks on goal — by a keeper and by a trailing defender — and in neither case was the offending player sent off. Last year, Watson had his teeth knocked out by Atlanta Silverback Danny Barrera; no discipline was handed down. And, the Eddies, being the lone mountain-time team in an NASL filled with clubs in the American southeast, have more travel nightmare stories to tell than people who regularly fly on Tupolevs.

Some people will say stop whining. But there’s enough black-cat-crossed-the-rabbit’s-path incidents in FCE’s history to become sort of a rallying cry.

Look, in the ‘70s both the Philadelphia Flyers and Oakland Raiders were able to sell we’re-dirty-and-you-love-it schtick. Being fans of those teams became badges of honour. In the 1990s, Arsenal was able to take a bunch of other teams’ castoffs and win titles, despite regularly leading the Premier League in red cards. Manchester City and Schalke are teams who have been able to turn their habit of blowing what should have been sure things into the stuff of legend.

Look, for a team to get an audience, it needs to be connect to an audience. And Edmontonians understand what it’s like to be misunderstood and underrated. Honestly, for a city that has as much disposable income as Edmonton, the fact that it can’t pack its stadium is a shame. According to Statistics Canada, Albertans make an average of $1,108.01 per week — only the Northwest Territories is higher. British Columbians average $873.14, and deal with a much higher cost of living. Ontarians are at $920.12 — ditto with the cost of living. The Canadian average is $910.74.

Yet the rest of the country still talks about Alberta as a backwater, even though many new retailers now come to Edmonton and Calgary before they go to Vancouver, Montreal or Toronto; the thinking is if you can’t get people to part with their money in Alberta, your business won’t work anywhere in Canada.

Edmonton is home to the current Giller Prize winner (Lynn Coady) and has one of North America’s hottest literary scenes, from the work of Todd Babiak to Greg Hollingshead to Wayne Arthurson to Michael Hingston to Marty Chan. Eighteen Bridges, one of the nation’s most esteemed magazines (and if you don’t subscribe to it, you’re a bad Canadian. Bad!), is published out of Edmonton. But, Edmontonians are so used to the “you’re from Edmonton. How quaint. When are you moving out?” that we wear it like a badge of honour.

Leslie Nielsen is ours. And, when we see Castle or Firefly, well Nathan Fillion is the guy who often comes home to hang at the Next Act, the restaurant where all the theatre folk hang out.

But we do enjoy watching SportsCentre and wondering “who there isn’t from Edmonton? Anyone?”

It’s not that other cities don’t make cultural contributions on the scale of Edmonton — they most certainly do — but it’s the fact that we understand that nothing we do makes outsiders think that we’re a city with a big mall. And the Oilers. But, mainly, the mall.

And let’s not talk about the big elephant in the room — the oil industry. It’s the reason that Alberta salaries are so high. It’s the big employer in the province, and it helps Alberta make transfer payments to the other provinces. But, outside of Alberta, it’s the great big dirty monster. A nation holds its nose at its biggest industry — and once again Albertans wonder why we’re so unloved when it was this black stuff that helped Canada weather the economic crash better than any other G8 nation.

This all marries with the kind of “nobody likes us, everybody hates us” mentality that FC Edmonton could use to sell itself. Always against the odds. Always isolated. Always disrespected.

And it could work well with the “home” games FC Edmonton will move to Fort McMurray, beginning next season. Hosting NASL games in the heart of the oil sands. Talk about a perfect background for the black sheep.

FCE could turn Fischer’s misstep into a long-term goldmine. FC Edmonton; love your home team, cause no one else does. Wear it like a badge of honour.

Because, if FCE don’t start packing Clarke Stadium soon, there won’t be many more bad calls to lament. There won’t be any calls at all.