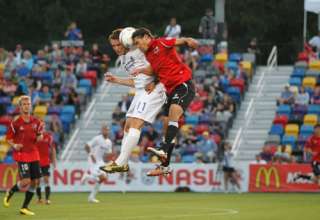 Going into Saturday’s match, FC Edmonton hadn’t scored in 439 minutes of NASL and Nutrilite Canadian Championship play. FCE had been outscored 11-0 in its past four games. The Atlanta Silverbacks entered the match at the bottom of the NASL standings, with just one point out of its first four games.

Atlanta was just what the doctor ordered. Paul Craig scored just seconds after FCE keeper Lance Parker made a couple of great saves, and Edmonton got back on the winning track with a 2-0 win in Georgia.

FCE got a late insurance goal when Craig, making his first NASL start of the season, made a pass to the centre of the box that deflected into the goal as an Atlanta defender came together with FCE striker Kyle Porter. The marker was awarded to Porter, but don’t be surprised if that gets revised into an own goal.

The turning point in the game came halfway through the second half. Atlanta had begun to press and the Silverbacks were pushing deeper into Edmonton territory. FC Edmonton coach Harry Sinkgraven had just taken off attacker Sam Lam for Dominic Oppong, a defensive-oriented player — and it looked like the visitors were going to try and hold the game at 0-0. Atlanta then got two great scoring chances. Kohei Matsushita left the ball in the area for attacking partner Matt Horth. Horth smashed a low drive at goal that Parker, playing because regular No. 1 Rein Baart was suspended because of the straight red he picked up in Sunday’s 5-0 loss to Montreal, did well to kick away. Matsushita had a chance on the ensuing corner but Parker got to that, too. The ball was then sent up the field, where Shaun Saiko pushed the ball into Atlanta penalty area. Oppong did well to hold it up, laid it off for Craig, who rolled in a perfect effort just inside the post.

“That chance came from a set play on the left,” said Parker. “We didn’t clear it out and the ball came across, and from there Atlanta got a shot. We got possession after the corner, got it up the field and we scored. It was good that we didn’t let Atlanta score there, it would have changed the momentum of the game completely.”

“After we scored we all turned to him (Parker) and said, ‘well done,’” said Saiko. “He makes a big save, and we go down and score the goal.”

And, for FCE, which has given up 11 goals in the last four, not conceding is just as big and maybe even bigger than getting back and the scoresheet.

“If you don’t let the opponent score, the worst you can do is one point,” said Saiko. “But that’s not what we were trying to do here. We were going for the three points. We played well, and the goals and the results are going to come.”

Edmonton came close just a couple of minutes after the second half kickoff, when a lofted attempt from Shawn Chin from well outside the area went over Silverbacks’ keeper Felipe Quintero, but skipped off the top of the crossbar.

Dutch veteran Paul Matthijs, who hurt his knee in the preseason, made his first start in the centre of the FCE defence alongside Paul Hamilton.

“The defence was all on the same page,” said Parker. “Paul definitely helped. He helps control the game, moving people around and holding the ball and keeping it.”

And, will Baart be back in Wednesday as the starter in Tampa? Or, will Sinkgraven stick with Parker?

“I’m doing everything I can to put pressure on so I can stay between the pipes,” said Parker.