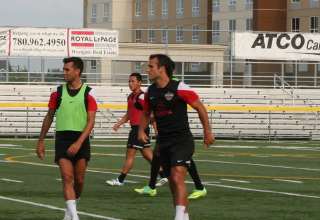 The San Antonio Scorpions media guide doesn’t use -our in words like colour. They don’t use the metric system in that part of Texas.

But, there’s no mistaking the Canadian content on this team, which sits at the top of the NASL fall-season table and boasts the best overall spring-fall record in the league. If the season ended today, the Scorpions would have home field advantage throughout the NASL playoffs, er. championship tournament. (Remember, we’re not supposed to call them “playoffs.”)

Coach Alen Marcina is a former Whitecap who hails from Surrey, B.C. Former Toronto FC player of the year Adrian Cann is on the roster. And, of course, Shaun Saiko, FC Edmonton’s all-time leading scorer, is also with the team. All three were in suburban Spruce Grove Saturday evening, as the Scorpions prepared to take on the Eddies. That game goes Sunday at Clarke Stadium.

Saiko has not started a game for the Scorpions since returning to the lineup after he underwent surgery for a double hernia. For six weeks, he was feeling pain and pressure before getting the double-hernia diagnosis. He doesn’t know if he’ll get a chance to play on Sunday, though we all know he’s dying to get a shot to play in front of his friends and family.

But Marcina hasn’t yet told Saiko if it’s yeah or nay.

“No I don’t know,” said Saiko. “First and foremost, we have to win, to get the three points. Hopefully I can help the team get three points, and if not I will be on the sidelines cheering them on.”

For Saiko, the visit home also allows him to reconnect with his partner, Erin Bennett. They are expecting a girl (that’s what the ultrasound says). She is six months pregnant. But she’s in Edmonton full-time while Saiko is in Texas. It isn’t easy for the two to be apart as they expect their first child.

“It’s hard, we make do with what we have,” said Saiko. “It’s basically red alert and I will come down as soon as I get the call.

“For sure. I’ve been looking forward to coming home for a while,see the missus, the baby, and family.”

Cann said it was nice to be back in Canada, and to have at least a bit of a cool breeze in the evening. After TFC decided not to pick up his contract option after an injury-filled 2012 campaign, Cann decided to take a year off and re-evaluate his soccer career. Even though there was interest from the Chicago Fire and Rochester of USL-PRO, Cann decided to keep himself and shape, but not commit to any contract. Even last year, the Scorpions had contacted him and asked if he wanted to play there. And that interest only increased after coach Tim Hankinson was replaced by Marcina, who is a former Whitecap teammate of Cann’s.

“Alen had reached out to me, we had played together in Vancouver, and said would you consider coming to help the guys out? And I thought, yeah, I still had the urge to play and win a championship and eventually made the commitment.”

Cann and former Whitecaps and Toronto FC designated player Eric Hassli started on the bench last week. Saiko didn’t join the team. It’s a sign of just how deep the squad is.

“You look in the locker room, we have great, great players, it’s tough to get a game,” said Saiko. “You have to work hard in training every day, to make it tougher for the coach to make a decision on who he wants to play. And I think we do a good job of that. I think that’s why we are getting the results we are getting. Everyone is working hard and trying to play and it carries over. Training carries over to the game. It’s good to have that depth.”

LOOK FOR AN IN-DEPTH LOOK AT “CANADA’S SCORPIONS” IN THE FALL ISSUE OF PLASTIC PITCH.