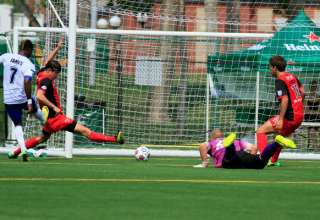 The San Antonio Scorpions came into Sunday’s game with FC Edmonton sporting a 6-0-0 road record in 2014. The Scorpions had a perfect 4-0-0 record in the NASL fall season. The Eddies had just one home win all season, and were winless and goalless in three previous NASL fall-season matches.

Of course, the Eddies would win handily, beating the Scorpions 3-1 and allowing only one shot on goal all game long — a first-half penalty-kick from Eric Hassli. From open play, the Scorpions didn’t generate a single shot on goal.

“They are the best team in the league, record wise, but we matched them,” said FCE winger Lance Laing, who set up two goals.

And Laing said the goals and the victory helped ease what has been a frustrating start to the fall season. The Eddies now have four points from four matches, and now clear out of town as Edmonton is one of the host cities for U-20 Women’s World Cup.

“We love it here,” said Laing. “We hope we can give the fans what they deserve.”

The Eddies started off brightly pushing the Scorpions back — and FCE, after hitting so many posts and missing so many chances in their first three games of the fall, got an absolute gift to open the scoring.

Before 10 minutes had expired, the Eddies got off the mat. And they got some help from Scorpions defender (and ex-Whitecap) Greg Janicki and keeper (ex-Los Angeles Galaxy) Josh Saunders.

Laing crossed a ball in from the left side. Janicki should have cut it off at the near post, but misplayed it. Still, the ball came right to Saunders. But it hit him and the chest and he spilled it out for Horace James, who then tapped it into an open goal.

After FCE’s Tomi Ameobi just fired a turnaround shot from the top of the box just wide, the Scorpions then got a gift of their own. Josue Soto lofted a free kick into the box; FCE keeper John Smits, distracted by Janicki, muffed his catch attempt. The ball fell into the box and Smits was judged to have brought down a Scorpions forward. Once you make the mistake by not catching the ball, it’s pretty hard to argue the penalty call. Former Whitecap and TFC striker Hassli rocketed the penalty into the top corner.

Both the Scorpions and Eddies had great chances to take the lead before halftime; Sainey Touray, after a clever layoff from Hassli, looked to have Smits at his mercy, but FCE fullback Edson Edward laid out to block the shot. Going the other way, Kareem Moses’ sliding effort to get on the end of a Horace James cross went just wide of the yawning cage.

But the second half was all Eddies.

In the 68th minute, Laing delivered a picture-perfect free kick into the box that we met by Ameobi, who out leaped the opposition to head home what would be the winning goal.

Daryl Fordyce put the icing on the cake, launching a right foot rocket from nearly 30 yards out that went into the top corner.

“For me, if Eric was still fit he could still play in MLS,” said Eddies coach Colin Miller. “It’s two times that Big Albert has played so well against him.”

Watson and a 10-man FCE side played the Scorpions to a 0-0 draw in the spring season. So, that makes it twice the two teams have met, and the Scorpions have got just one point out of the Eddies.

“As a former player, I can tell you it is easier to play against better opposition,” said Miller. “It’s easier because you raise the level of play.”

And Miller said giving up only the single shot on goal is one that the Eddies can build on.

“At any level of football, that’s a fantastic achievement.”

FCE’s all-time leading scorer, Shaun Saiko, came on as a second-half sub for the Scorpions in his first appearance at Clarke Stadium as a visiting player. It was too late for him to change the game.