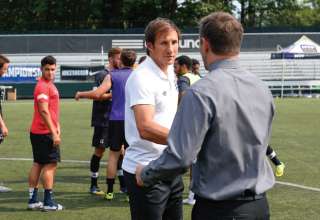 Two weeks before the start of the PDL season, K-W United FC didn’t have a coach. Former national teamer Chris Pozniak took the reins — and led the team to a championship

Talk about premier development. Last April, Chris Pozniak was dipping his toes back into the soccer world after exploring a new career in banking. By August, Pozniak wasn’t just coaching, he already had a notable trophy on his résumé after leading K-W United FC to the Premier Development League championship.

The series of events happened so quickly that Pozniak hasn’t quite processed his last six months.

“There wasn’t really time to pause and think about it because the games came fast and, then, before you know it, it’s over,” the former Canadian international says. “But, it worked out as well as it possibly could have.”

That may be an understatement given how K-W stormed its way to the PDL title. After beginning the season with a 2-2-0 record, United proceeded to go unbeaten (9-0-1) over its remaining league schedule, and then racked up five more wins in the single-elimination knockout playoff tournament. In the championship match on August 2, K-W United rode three first-half goals to a wild 4-3 win over the New York Red Bulls U-23 squad.

The championship was the first in United’s five-year history, though a strong performance in 2014 led to an expectation for success this season. Stuart Neely coached K-W last year, but left the job in January to rejoin Toronto FC’s Academy in several coaching capacities, including helming TFC’s own PDL side.

This left K-W team president Barry MacLean looking for a new head coach, and he ended up turning to a familiar name. MacLean is also an accredited player agent. Pozniak was one of MacLean’s former clients, and was in talks to join the team as an assistant coach. Instead, Pozniak was offered the top job just two weeks before the PDL season opener.

On paper, there could’ve been some awkwardness for Pozniak and MacLean in moving from a player-agent relationship to a president-coach relationship. The change in power dynamic, however, never became an issue due to United’s success.

“It can be tricky but it was easy for us. We didn’t have all that many setbacks,” Pozniak says. “I suppose if the team had done poorly for a longer stretch of time it might’ve been a problem…. We had a little bit of a tough start to the season and you always get the sense that there’s a little bit of pressure. Barry’s good at letting everyone do their jobs.”

Pozniak also credits his players with being “very professional” and “kind of helping in the first little while” while both the coach and roster were getting to know each other. “Although we didn’t have that many players returning, the ones who were returning were sort of already leaders in the group. They had a good training culture… So I didn’t have to too much, and it wasn’t like I was getting together 20 new faces,” he says.

Pozniak’s 14-year playing career saw him earn 24 caps for Canada’s senior team, as well as manning the back line on the inaugural Toronto FC squad in 2007, two stints with Vancouver Whitecaps before the team moved to MLS, and action with clubs in Scotland, Sweden and Norway. He dabbled in youth coaching as his playing days wrapped up though, upon retiring, he  first looked towards the nine-to-five world since he felt he needed a change in direction. Pozniak worked as a business development plan advisor at BMO Nesbitt Burns and then as an investment representative for a TD Waterhouse discount brokerage.

“When you play soccer for a while, you can get disgruntled about some things,” Pozniak says. “Towards the end when things don’t go well for you, you feel like maybe you need to take a step away. That’s how I felt at the time and maybe I needed that in order to refuel the time but I don’t think you can ever give up the game.

“I have a lot of interests and when I stopped playing I thought that [banking] was the avenue I wanted to go in. I still have an interest…in things like that but football sucks you back in. It’s tough to stay away.”

Now that Pozniak is back in, however, he and K-W United find themselves with a long wait before they can defend their title.

Since the PDL season was completed in less than two months and K-W’s five playoff games were all played in less than two weeks, Pozniak feels there was little opportunity for the club to fully seize the momentum of its championship run.

“Now is the time when you want to strike while the iron’s hot and market the team but there’s no games,” the coach says. “There’s definitely preparation going on behind the scenes, but it’s sort of bad timing to get all the hoopla out since there’s no season right now.”

Every club in the world obviously wants good results, but United particularly eager to make its mark in order to establish itself in its new home. Originally known as Hamilton Rage FC in its first two seasons, the club averaged less than 200 fans per game before moving to Kitchener-Waterloo prior to the 2013 season. Attendance more than quintupled in the club’s first season in its new home, though that number has since dropped to the sub-200 mark again in 2015, despite United’s success.

Winning is always the easiest way for any team to promote itself, though it’s a particularly important step for an independently run PDL franchise. Unlike several other PDL clubs, K-W United isn’t affiliated with an MLS franchise. Such teams, Pozniak notes, “don’t necessarily need to win. They’re just happy to be around and have players playing at a good level and to be able to see other players on other teams come to them.

“There is advantage to having MLS backing but they’re on a different agenda as well .They’re not overly concerned about the result. As a non-MLS affiliated club, you can use that as motivation.”

Pozniak is staying busy during the PDL offseason, assisting the York University soccer program and continuing to gain experience. His entry into the coaching ranks is still so fresh that Pozniak is happy to just keep learning — taking new lessons and challenges as they come is both a key plank of his future plans (evidenced by his sudden hiring at K-W United) and his coaching philosophy.

“I don’t necessarily see myself coaching Canada in the World Cup in 10 years, I’ve never had any such feelings,” Pozniak says. “I’m enjoying things right now, I’d like to stay involved in soccer in some capacity and this is very good right now, very good learning for me.

“I’ve learned things good or bad from pretty much every coach. One thing is you have to keep it simple and you can’t really enforce your will on anything. It’s one thing to have an ideology about something but the other thing is, you’ve got to work. You have to adapt to every situation and be flexible.”