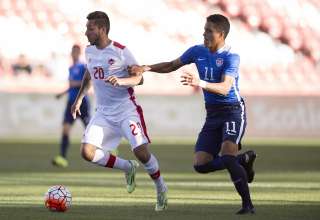 So what a weekend, huh? Alphonso Davies comes in as an 86th minute substitute to make his league debut for Bayern Munich, another Edmontonian, Tosaint Ricketts, signs with Lithuanian side FK Suduva, and on Tuesday, the Canadian Premier League is expected to make a major announcement. Canadian Pat Onstad is named the technical director of the Columbus Crew.

I was thinking of writing something truly original, like “what does Davies’s substitute appearance for Bayern mean for soccer in Canada,” but it was truly such a unique and original thinkpiece that I didn’t think the world would be ready for it. I mean, no one is writing about it.

Honestly, it’s hard to keep up with the Canadian soccer news. And, how often have we been able to say that? That there’s so much Canadian soccer news coming out in such a short period of time, that we’re having a hard time following it all? Usually, we get a news tidbit and milk it for two or three weeks. One rumour can do us for a month. Heck, it’s Monday and Davies’s debut already feels like it happened a month ago.

“We anticipated offering Dylan a contract, and after thorough scouting across the country at various levels, we felt that it should happen sooner rather than later,” said Valour coach Rob Gale in a release issued by the club. “We want to give him that platform to get back to his previous level in professional soccer.”

Carreiro represented Canada in 2015’s CONCACAF Olympic qualifying tournament. He appeared in two games. He played two games for Canada’s U-20 side in 2013, scoring once.

Gale has high hopes for Attardo: ““Tyler is a player I know well and have been following his progress over the last few years. We were excited going into the Winnipeg GotGame trials to see how he would perform, and to his credit he was the standout player and confirmed the potential that he has. This will be an important step in his early professional soccer career.”

The real challenge (and this is will be somewhat new for the three Canadian MLS clubs and the Ottawa Fury — plus the CanPL teams) will be the timing of the announcements. With Canadian soccer news coming fast and furious, how do you make your little tidbit of news stand out? How to make sure the Twitterverse doesn’t forget it in an hour? It’s a challenge for those who want to make sure that their team news connects with fans and creates a buzz that last longer than 15 minutes.

It’s easy right now for news to get lost — and for Canadian soccer, that’s a really new phenomenon. Usually, the challenge is to get the mainstream to pick up that one important item. Now, it’s about making messages stand out in a sea of soccer noise.