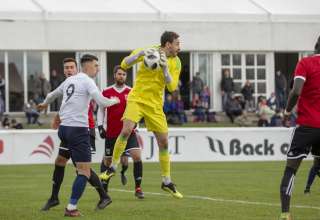 Cavalry FC has inked four more Canadians, three of whom were with last year’s PDL-winning Foothills FC side.

Foothills alumni Nico Pasquotti, Carlos Patino and Dean Northover will wear Cavalry red and green in the inaugural Canadian Premier League season. Also added to the mix is Niko Giantsopoulos, a Canadian who had played professionally in Australia and then auditioned for the Cavalry in last autumn’s Al Classico friendlies against FC Edmonton’s prospects. Giantsopoulos goes right into a battle with Halifax’s Elton John for “who has the most headline-ready name in CanPL?”

Pasquotti scored the extra-time decider in the 2018 final, and is a graduate of the University of Lethbridge’s soccer program. Northover was a physical presence in that final, and got a yellow card for a rash challenge. In 2018, as a member of SAIT, he was named the Alberta Colleges Athletic Conference player of the year, prompting his Trojans coach, Grant Stevens, to say this: “He’s like a hair dryer in a bathtub filled with water — simply electrifying.”

Giantsopoulos took a load far less traveled, moving to Tasmania to cut his professional teeth with Devonport City. He’ll have a challenge in battling Marco Carducci, whom the Cavalry has already signed, for the No. 1 shirt.

It’s interesting to see how the different CanPL teams are being built. While the Ontario teams are showing a reliance on League1 Ontario grads, the Alberta teams are choosing to go with what they know. Cavalry is leaning heavily on the Foothills roster, while FC Edmonton has signed many of its Academy players and University of Alberta prospects.