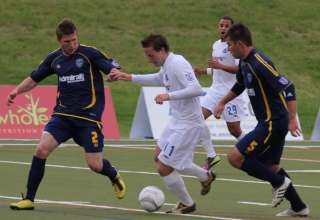 FC Edmonton vaulted into second place in the NASL standings with a 2-1 Victoria Day win over NSC Minnesota Stars at Foote Field.

For FCE, the win cleared the bad feelings that lingered from the club’s only other game it has played at Foote Field this season, a 5-0 win to the Montreal Impact.

Kyle Porter scored twice for FCE, after Minnesota had taken the lead through Simone Bracalello.

“The monkey is off my back,” said Porter, who mesmerized the Minnesota markers with his pace and trickery on the right side of the attack before having to leave the game with a minor injury. “More goals to come.”

Porter now has three on the season.

The game featured a stark contrast of styles. While FCE tried to work the ball on the fake grass using the short passes and interplay of coach Harry Sinkgraven’s 4-3-3 system, Minnesota spent the better part of 90 minutes pouring balls into the FCE penalty area and using tall target men, like striker Jeff Cosgriff, to win balls in opposition territory.

NSC keeper Matt VanOekel hammered goal kick after goal kick all the way down the field towards the FCE penalty area, but the central defensive pairing of Paul Matthijs and Paul Hamilton weathered the storm, despite being smaller than the opposition.

But Minnesota struck first after an error by FCE left back Alex Surprenant. He misjudged a ball that he was running back to retrieve, stumbled and was stripped by NSC’s Lucas Rodriguez. Rodriguez whipped in a corner that Cosgriff headed off the post. But FCE couldn’t clear their lines, another cross was whipped in and this time it was Bracalello who had the easy job of heading past Rein Baart, who got the start in goal ahead of Lance Parker, who was the NASL’s defensive player of the week in the previous cycle.

Parker had looked to have taken over the starting job after Baart was sent off in the 5-0 loss to Montreal, winning and drawing and allowing just one goal in FCE’s recent road trip. But Baart was a surprise on Sinkgraven’s lineup sheet.

But, just a minute after the visitors took the lead, Edmonton got it back. Shaun Saiko bullied his way through the midfield, and left the ball for fellow midfielder Kyle Yamada to shoot. Van Oekel did well to get down and make the save but Porter never broke off his run. He beat the defenders to the rebound and slammed the tying goal home.

“We try as much as possible to work on that (chasing rebounds) in training,” said Porter. “We work on wing play, attacking the back post.”

In the second half, Porter got the eventual match winner. After Yamada made a deft run down the left wing and plowed a dangerous low cross into the box, the ball fell to Dominic Oppong, whose strike was blocked. But the ball bounced to Porter, who settled it and smashed a low left-footed drive past Van Oekel.

Baart rewarded Sinkgraven’s faith in him by robbing Bracalello late, spawling to catch a goal-bound shot with his feet late in the match. He also did well to smother a couple of low crosses from Minnesota second-half sub Amani Walker, who was dangerous down the left from the moment he came in.

FCE sickbay: Striker Chris Lemire will be out at least a month after suffering a cracked rib and puncturing his lung in a friendly.

Lemire was hurt over the weekend as FC Edmonton’s reserves faced the Calgary Callies, the club once coached by current FCE assistant Dave Randall.