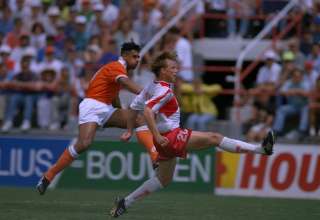 There is one honour that belongs to Geoff Aunger that no other Canadian soccer player can ever take from him.

Aunger, the Red Deer, Alta. native who was capped 44 times by the national team, was the first Canadian to ever play on an MLS Cup winner, the D.C. United side of 1999 that some would argue is still the greatest team to ever play in the league.

Aunger was one of a handful of Canadians who played in the early years of MLS, with the shootouts to decide games, minigames to decide tied playoff series and, of course, those garish uniforms. Frank Yallop, Iain Fraser and Mark Watson were some of Aunger’s Canadian teammates who also managed to find work in MLS long before Toronto FC was conceived.

“Making it in that league at that time was very difficult,” said Aunger, who now works in New York as a private banker. “At the time, we, the Canadian players, counted as import players. And each team was only allowed three imports. So, unless you had a green card, you were an import and you needed to produce. And that’s why, for players like myself, (Mark) Watson, (Frank) Yallop, (Iain) Fraser, (Rick) Titus and (Jason) Bent it was tough. And, remember that every year, you were playing for next year. Everyone was on one-year contracts. There were no three- or four-year deals at that time.”

Aunger was a regular for the New England Revolution in 1996; he returned to MLS with D.C. United and played for that club from 1998-2000. He left the league as a member of the Colorado Rapids.

Aunger remembers the Revs’ first MLS match; on the road in New Jersey, a game the Revs won 1-0.

“It really was special, that inaugural season. Because the league was new, there was a lot of interest. We played in stadium that were sold out, like the 80,000 at Giants Stadium for the MetroStars’ home opener at the time.”

“When the league began, the quality of the players was strong. So many good American players came back to play in MLS; Tab Ramos, John Harkes. And then, you had a lot of good experienced players behind those stars. Then, as the league went on, they replaced a lot of those older players, the 28- to 32-year-old players, in favour of younger, less experienced players. So, they had big stars and had no middle guys with any experience.”

And, he still marvels at D.C. United, which won two championships before Aunger arrived. He was part of the team that lost the final to Chicago in 1998 and won in 1999, which is remembered as possibly the best edition of what still remains MLS’ most decorated franchise.

“For an organization like D.C. United, every year they had such a dominant team, which meant that they had to reward the key players with better contracts. With a strict salary cap, that meant they had to recycle the team year after year.

“The management team was excellent; Kevin Payne was general manager and Bruce Arena was the coach. And there was such a high level of professionalism with the club, from watching film to training for the games. And, after Bruce Arena left as coach, Thomas Rongen continued the tradition. We had such a good crop of players in 1998; I think 13 of us were internationals; Jaime Moreno and (Marco) Etcheverry for Bolivia, Eddie Pope, Jeff Agoos, Roy Wegerle.”

Aunger still tries to get back to the Washington area each and every year, as D.C. United welcomes back its alumni on an annual basis. And, Aunger has played with former teammate (and New York Red Bulls ex-coach) Richie Williams in the NYC area. He has also played at some of Canadian hoops star and Vancouver Whitecaps partner Steve Nash’s soccer events that have been held in the Big Apple.

But, even though he makes his home in the U.S., Aunger’s business sees him regularly fly back to make stops in Vancouver and Edmonton. Because, throughout the ‘90s, Commonwealth Stadium was the home turf of the national team — and it’s less than two hours up the Queen Elizabeth Highway from his hometown of Red Deer — Aunger is hoping that new NASL side FC Edmonton can one day join Toronto FC, the Whitecaps and Montreal Impact in MLS.

“If there is any place for a fourth MLS team in Canada, it would be Edmonton. It has such a great tradition of supporting the national team,” said Aunger, who added one of his fondest national-team memories was facing Brazil in front of a sellout crowd in 1994.”

While Canada didn’t qualify for USA 1994, Aunger said that the team should be remembered fondly. Canada finished second in CONCACAF qualifying, which put it in a playoff against Australia for the right to go into a playoff with Argentina. Canada beat the Aussies 2-1 in Edmonton, but lost in penalties in the second leg after Australia won 2-1 at home. The Aussies were beaten by Argentina in the next phase.

“The qualifying for the 1994 World Cup was a great time. If we had the same qualifying format as we do today, we would have made it. But CONCACAF got just one other guaranteed spot because the United States were the hosts. So, we lost out to Mexico and had to play off against Australia. But it was such a great time, playing Brazil, Spain, Holland and Morocco (Canada got to play these sides when they came to North America to tune up for the World Cup in the U.S.). These are teams we should be playing all the time, not Jamaica and Trinidad.”

Aunger admitted that his job and family commitments mean he doesn’t see as many MLS matches as he’d like. But, he is enthused that Dwayne De Rosario is now a member of the Red Bulls.

“I still think Dwayne should have spent more time in Europe. He had the ability. Look at how special a player he’s been in MLS.”

And, as a Canadian living in New York, Aunger understands the pressure that a lot of young Canadians living abroad have to face when deciding on their international playing careers. Even though Aunger answered Canada’s call repeatedly throughout the 1990s, he doesn’t believe Canadians should be vindictive when players choose to move away from the Maple Leaf. When Canada doesn’t play a high-profile schedule, when players need to convince their managers in Europe that playing in Central America for what’s perceived as a country that has a low-percentage chance of qualifying for World Cup, it’s not an easy choice for them to make.

“There’s a lot of pressure on players to decide if they want to play somewhere else, and you can’t blame players if they have prospects to play or represent different countries. There’s a lot of money involved, and there’s big difference if you decide to play for England than Canada. For some, it’s not really a choice.”