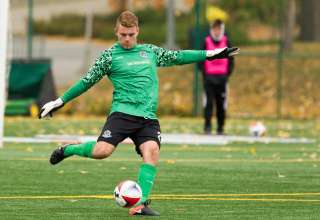 Both have played for coach Rob Gale in different levels of youth soccer.

“He’s always asking you to express yourself on the field, he’s not holding anyone back,” said Sacramento, who was with TFC Academy, before going to York University and transferring to Florida Gulf Coast University. “It’s pretty easy to play for a coach like that. That allows you to be able to do your thing out there.”

Farago played for FC Edmonton and, after the NASL went on hiatus, went to St. Patrick’s of the League of Ireland.

There’s one intangible, outside of shot-stopping, that Farago provides — and that’s his boot. There was only one other goalkeeper I’d seen in NASL who could hammer a ball close to anything Farago could (Atlanta’s Daniel Illyes) muster, and I’d still give Farago the edge. He can deliver a ball from his box to nearly the top of the opponent’s penalty area. So, if Valour FC coach Rob Gale wants to immediately put the opposition under pressure, Farago can deliver the kick that basically rams the ball down the centre backs’ throats.

It was joked about more than a few times that Farago should simply go for the opposition net off a goal kick.

Farago is thrilled to be able to play at home.

“I’ve already had dreams of it,” said Farago. “Ever since I knew the team was coming around, it was something I had in the back of my head, something I tried to make happen. It’s really surreal now that I’m going to get the opportunity to step on the field.”